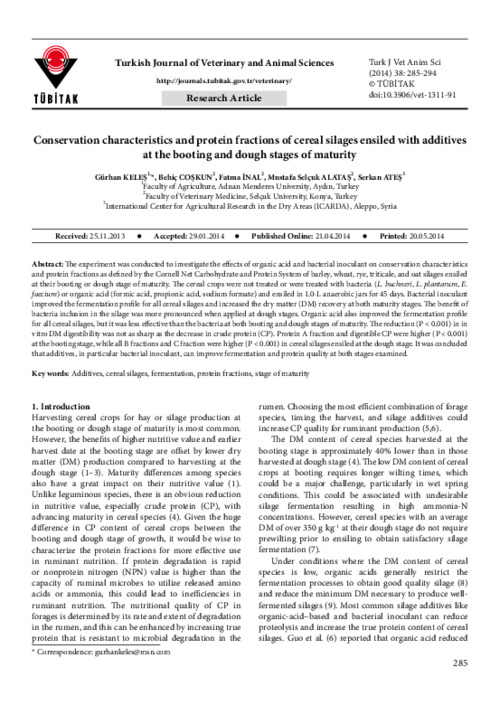 The experiment was conducted to investigate the effects of organic acid and bacterial inoculant on conservation characteristics and protein fractions as defined by the Cornell Net Carbohydrate and Protein System of barley, wheat, rye, triticale, and oat silages ensiled at their booting or dough stage of maturity. The cereal crops were not treated or were treated with bacteria (L. buchneri, L. plantarum, E. faecium) or organic acid (formic acid, propionic acid, sodium formate) and ensiled in 1.0-L anaerobic jars for 45 days. Bacterial inoculant improved the fermentation profile for all cereal silages and increased the dry matter (DM) recovery at both maturity stages. The benefit of bacteria inclusion in the silage was more pronounced when applied at dough stages. Organic acid also improved the fermentation profile for all cereal silages, but it was less effective than the bacteria at both booting and dough stages of maturity. The reduction (P < 0.001) in in vitro DM digestibility was not as sharp as the decrease in crude protein (CP). Protein A fraction and digestible CP were higher (P < 0.001) at the booting stage, while all B fractions and C fraction were higher (P < 0.001) in cereal silages ensiled at the dough stage. It was concluded that additives, in particular bacterial inoculant, can improve fermentation and protein quality at both stages examined.