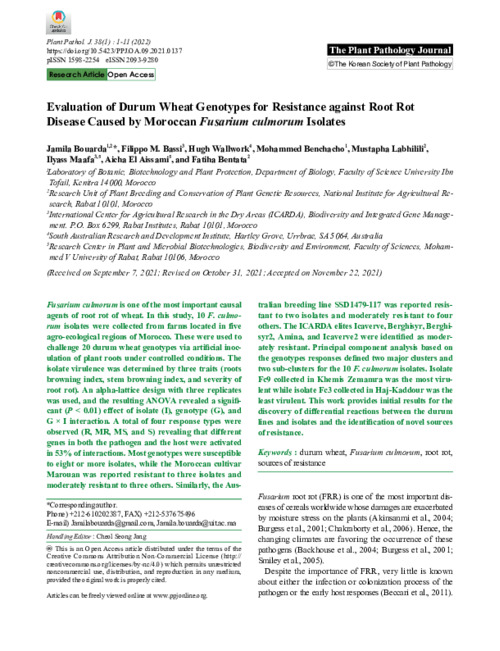 Fusarium culmorum is one of the most important causal agents of root rot of wheat. In this study, 10 F. culmorum isolates were collected from farms located in five agro-ecological regions of Morocco. These were used to challenge 20 durum wheat genotypes via artificial inoculation of plant roots under controlled conditions. The isolate virulence was determined by three traits (roots browning index, stem browning index, and severity of root rot). An alpha-lattice design with three replicates was used, and the resulting ANOVA revealed a significant (P < 0.01) effect of isolate (I), genotype (G), and G × I interaction. A total of four response types were observed (R, MR, MS, and S) revealing that different genes in both the pathogen and the host were activated in 53% of interactions. Most genotypes were susceptible to eight or more isolates, while the Moroccan cultivar Marouan was reported resistant to three isolates and moderately resistant to three others. Similarly, the Australian breeding line SSD1479-117 was reported resistant to two isolates and moderately resistant to four others. The ICARDA elites Icaverve, Berghisyr, Berghisyr2, Amina, and Icaverve2 were identified as moderately resistant. Principal component analysis based on the genotypes responses defined two major clusters and two sub-clusters for the 10 F. culmorum isolates. Isolate Fc9 collected in Khemis Zemamra was the most virulent while isolate Fc3 collected in Haj-Kaddour was the least virulent. This work provides initial results for the discovery of differential reactions between the durum lines and isolates and the identification of novel sources of resistance.