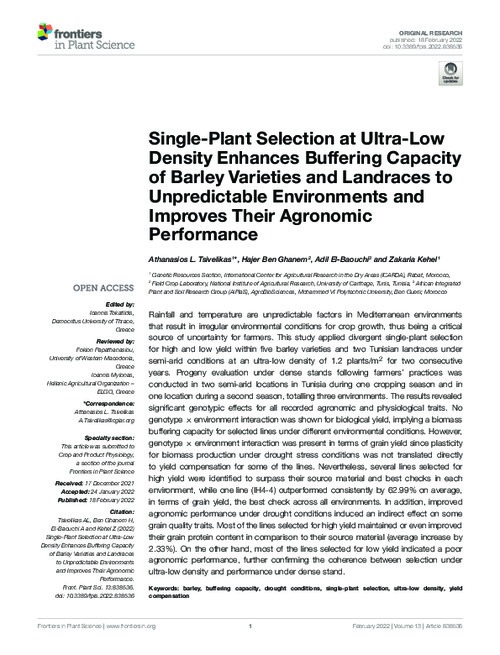 Rainfall and temperature are unpredictable factors in Mediterranean environments that result in irregular environmental conditions for crop growth, thus being a critical source of uncertainty for farmers. This study applied divergent single-plant selection for high and low yield within five barley varieties and two Tunisian landraces under semi-arid conditions at an ultra-low density of 1.2 plants/m2 for two consecutive years. Progeny evaluation under dense stands following farmers’ practices was conducted in two semi-arid locations in Tunisia during one cropping season and in one location during a second season, totalling three environments. The results revealed significant genotypic effects for all recorded agronomic and physiological traits. No genotype environment interaction was shown for biological yield, implying a biomass buffering capacity for selected lines under different environmental conditions. However, genotype environment interaction was present in terms of grain yield since plasticity for biomass production under drought stress conditions was not translated directly to yield compensation for some of the lines. Nevertheless, several lines selected for high yield were identified to surpass their source material and best checks in each environment, while one line (IH4-4) outperformed consistently by 62.99% on average, in terms of grain yield, the best check across all environments. In addition, improved agronomic performance under drought conditions induced an indirect effect on some grain quality traits. Most of the lines selected for high yield maintained or even improved their grain protein content in comparison to their source material (average increase by 2.33%). On the other hand, most of the lines selected for low yield indicated a poor agronomic performance, further confirming the coherence between selection under ultra-low density and performance under dense stand.