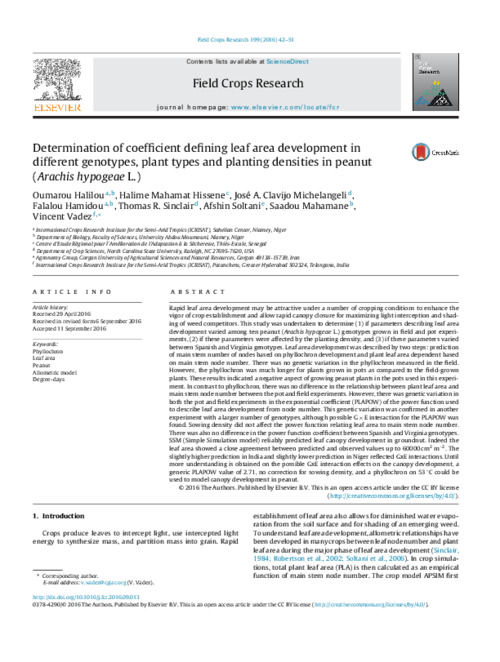 tRapid leaf area development may be attractive under a number of cropping conditions to enhance thevigor of crop establishment and allow rapid canopy closure for maximizing light interception and shad-ing of weed competitors. This study was undertaken to determine (1) if parameters describing leaf areadevelopment varied among ten peanut (Arachis hypogeae L.) genotypes grown in field and pot experi-ments, (2) if these parameters were affected by the planting density, and (3) if these parameters variedbetween Spanish and Virginia genotypes. Leaf area development was described by two steps: predictionof main stem number of nodes based on phyllochron development and plant leaf area dependent basedon main stem node number. There was no genetic variation in the phyllochron measured in the field.However, the phyllochron was much longer for plants grown in pots as compared to the field-grownplants. These results indicated a negative aspect of growing peanut plants in the pots used in this experi-ment. In contrast to phyllochron, there was no difference in the relationship between plant leaf area andmain stem node number between the pot and field experiments. However, there was genetic variation inboth the pot and field experiments in the exponential coefficient (PLAPOW) of the power function usedto describe leaf area development from node number. This genetic variation was confirmed in anotherexperiment with a larger number of genotypes, although possible G × E interaction for the PLAPOW wasfound. Sowing density did not affect the power function relating leaf area to main stem node number.There was also no difference in the power function coefficient between Spanish and Virginia genotypes.SSM (Simple Simulation model) reliably predicted leaf canopy development in groundnut. Indeed theleaf area showed a close agreement between predicted and observed values up to 60000 cm2m−2. Theslightly higher prediction in India and slightly lower prediction in Niger reflected GxE interactions. Untilmore understanding is obtained on the possible GxE interaction effects on the canopy development, ageneric PLAPOW value of 2.71, no correction for sowing density, and a phyllochron on 53◦C could beused to model canopy development in peanut.