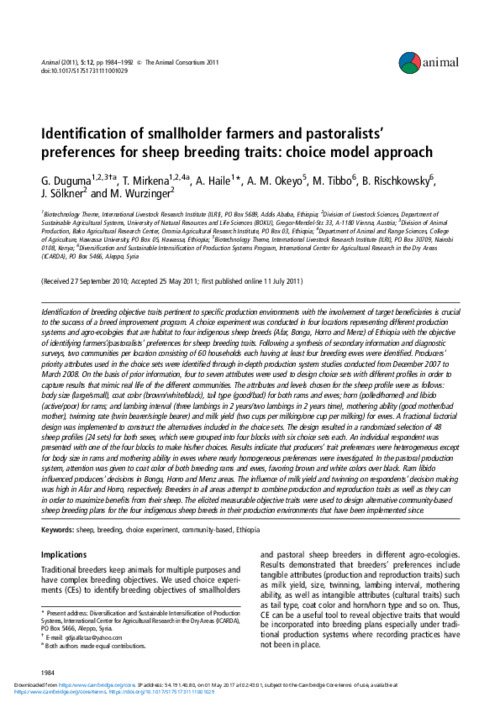 Identification of breeding objective traits pertinent to specific production environments with the involvement of target beneficiaries is crucial to the success of a breed improvement program. A choice experiment was conducted in four locations representing different production systems and agro-ecologies that are habitat to four indigenous sheep breeds (Afar, Bonga, Horro and Menz) of Ethiopia with the objective of identifying farmers'/pastoralists' preferences for sheep breeding traits. Following a synthesis of secondary information and diagnostic surveys, two communities per location consisting of 60 households each having at least four breeding ewes were identified. Producers' priority attributes used in the choice sets were identified through in-depth production system studies conducted from December 2007 to March 2008. On the basis of prior information, four to seven attributes were used to design choice sets with different profiles in order to capture results that mimic real life of the different communities. The attributes and levels chosen for the sheep profile were as follows: body size (large/small), coat color (brown/white/black), tail type (good/bad) for both rams and ewes; horn (polled/horned) and libido (active/poor) for rams; and lambing interval (three lambings in 2 years/two lambings in 2 years time), mothering ability (good mother/bad mother), twinning rate (twin bearer/single bearer) and milk yield (two cups per milking/one cup per milking) for ewes. A fractional factorial design was implemented to construct the alternatives included in the choice sets. The design resulted in a randomized selection of 48 sheep profiles (24 sets) for both sexes, which were grouped into four blocks with six choice sets each. An individual respondent was presented with one of the four blocks to make his/her choices. Results indicate that producers' trait preferences were heterogeneous except for body size in rams and mothering ability in ewes where nearly homogeneous preferences were investigated. In the pastoral production system, attention was given to coat color of both breeding rams and ewes, favoring brown and white colors over black. Ram libido influenced producers' decisions in Bonga, Horro and Menz areas. The influence of milk yield and twinning on respondents' decision making was high in Afar and Horro, respectively. Breeders in all areas attempt to combine production and reproduction traits as well as they can in order to maximize benefits from their sheep. The elicited measurable objective traits were used to design alternative community-based sheep breeding plans for the four indigenous sheep breeds in their production environments that have been implemented since.