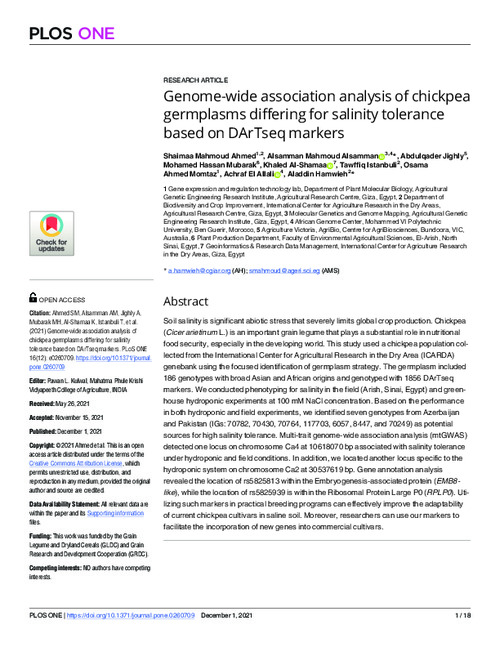 Soil salinity is significant abiotic stress that severely limits global crop production. Chickpea (Cicer arietinum L.) is an important grain legume that plays a substantial role in nutritional food security, especially in the developing world. This study used a chickpea population collected from the International Center for Agricultural Research in the Dry Area (ICARDA) genebank using the focused identification of germplasm strategy. The germplasm included 186 genotypes with broad Asian and African origins and genotyped with 1856 DArTseq markers. We conducted phenotyping for salinity in the field (Arish, Sinai, Egypt) and greenhouse hydroponic experiments at 100 mM NaCl concentration. Based on the performance in both hydroponic and field experiments, we identified seven genotypes from Azerbaijan and Pakistan (IGs: 70782, 70430, 70764, 117703, 6057, 8447, and 70249) as potential sources for high salinity tolerance. Multi-trait genome-wide association analysis (mtGWAS) detected one locus on chromosome Ca4 at 10618070 bp associated with salinity tolerance under hydroponic and field conditions. In addition, we located another locus specific to the hydroponic system on chromosome Ca2 at 30537619 bp. Gene annotation analysis revealed the location of rs5825813 within the Embryogenesis-associated protein (EMB8- like), while the location of rs5825939 is within the Ribosomal Protein Large P0 (RPLP0). Utilizing such markers in practical breeding programs can effectively improve the adaptability of current chickpea cultivars in saline soil. Moreover, researchers can use our markers to facilitate the incorporation of new genes into commercial cultivars.