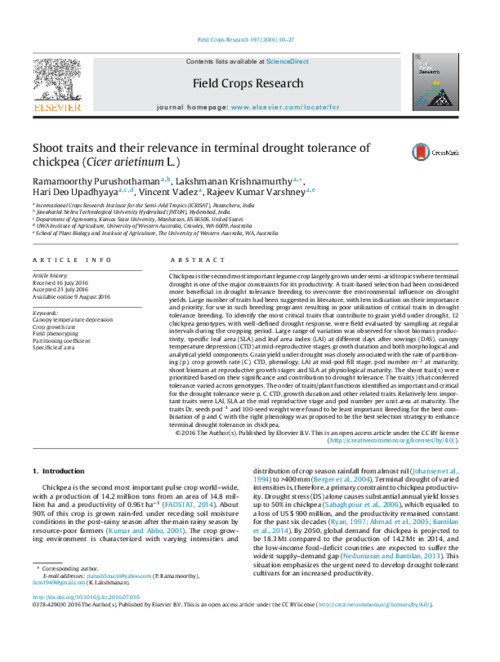 Chickpea is the second most important legume crop largely grown under semi-arid tropics where terminal drought is one of the major constraints for its productivity. A trait-based selection had been considered more beneficial in drought tolerance breeding to overcome the environmental influence on drought yields. Large number of traits had been suggested in literature, with less indication on their importance and priority, for use in such breeding programs resulting in poor utilization of critical traits in drought tolerance breeding. To identify the most critical traits that contribute to grain yield under drought, 12 chickpea genotypes, with well-defined drought response, were field evaluated by sampling at regular intervals during the cropping period. Large range of variation was observed for shoot biomass productivity, specific leaf area (SLA) and leaf area index (LAI) at different days after sowings (DAS), canopy temperature depression (CTD) at mid-reproductive stages, growth duration and both morphological and analytical yield components. Grain yield under drought was closely associated with the rate of partitioning (p), crop growth rate (C), CTD, phenology, LAI at mid-pod fill stage, pod number m−2 at maturity, shoot biomass at reproductive growth stages and SLA at physiological maturity. The shoot trait(s) were prioritized based on their significance and contribution to drought tolerance. The trait(s) that conferred tolerance varied across genotypes. The order of traits/plant functions identified as important and critical for the drought tolerance were p, C, CTD, growth duration and other related traits. Relatively less important traits were LAI, SLA at the mid reproductive stage and pod number per unit area at maturity. The traits Dr, seeds pod−1 and 100-seed weight were found to be least important. Breeding for the best combination of p and C with the right phenology was proposed to be the best selection strategy to enhance terminal drought tolerance in chickpea.