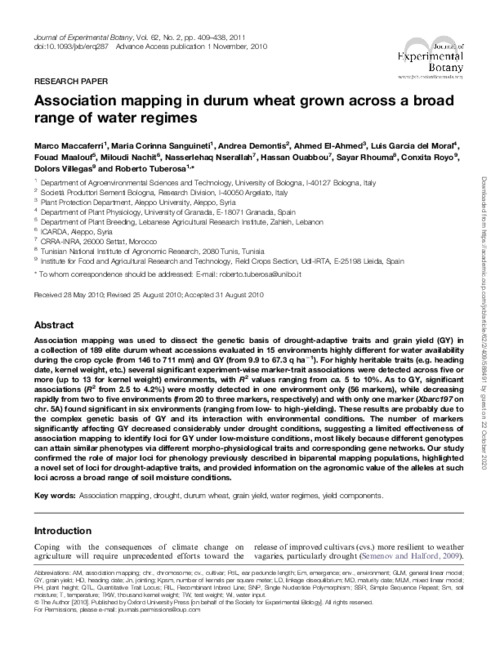 Association mapping was used to dissect the genetic basis of drought-adaptive traits and grain yield (GY) in a collection of 189 elite durum wheat accessions evaluated in 15 environments highly different for water availability during the crop cycle (from 146 to 711 mm) and GY (from 9.9 to 67.3 q ha(-1)). For highly heritable traits (e.g. heading date, kernel weight, etc.) several significant experiment-wise marker-trait associations were detected across five or more (up to 13 for kernel weight) environments, with R-2 values ranging from ca. 5 to 10%. As to GY, significant associations (R-2 from 2.5 to 4.2%) were mostly detected in one environment only (56 markers), while decreasing rapidly from two to five environments (from 20 to three markers, respectively) and with only one marker (Xbarc197 on chr. 5A) found significant in six environments (ranging from low- to high-yielding). These results are probably due to the complex genetic basis of GY and its interaction with environmental conditions. The number of markers significantly affecting GY decreased considerably under drought conditions, suggesting a limited effectiveness of association mapping to identify loci for GY under low-moisture conditions, most likely because different genotypes can attain similar phenotypes via different morpho-physiological traits and corresponding gene networks. Our study confirmed the role of major loci for phenology previously described in biparental mapping populations, highlighted a novel set of loci for drought-adaptive traits, and provided information on the agronomic value of the alleles at such loci across a broad range of soil moisture conditions.