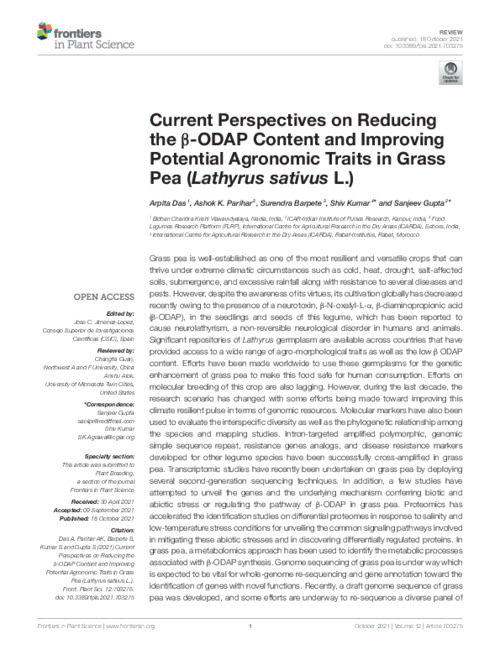 Grass pea is well-established as one of the most resilient and versatile crops that can thrive under extreme climatic circumstances such as cold, heat, drought, salt-affected soils, submergence, and excessive rainfall along with resistance to several diseases and pests. However, despite the awareness of its virtues, its cultivation globally has decreased recently owing to the presence of a neurotoxin, β-N-oxalyl-L-α, β-diaminopropionic acid (β-ODAP), in the seedlings and seeds of this legume, which has been reported to cause neurolathyrism, a non-reversible neurological disorder in humans and animals. Significant repositories of Lathyrus germplasm are available across countries that have provided access to a wide range of agro-morphological traits as well as the low β ODAP content. Efforts have been made worldwide to use these germplasms for the genetic enhancement of grass pea to make this food safe for human consumption. Efforts on molecular breeding of this crop are also lagging. However, during the last decade, the research scenario has changed with some efforts being made toward improving this climate resilient pulse in terms of genomic resources. Molecular markers have also been used to evaluate the interspecific diversity as well as the phylogenetic relationship among the species and mapping studies. Intron-targeted amplified polymorphic, genomic simple sequence repeat, resistance genes analogs, and disease resistance markers developed for other legume species have been successfully cross-amplified in grass pea. Transcriptomic studies have recently been undertaken on grass pea by deploying several second-generation sequencing techniques. In addition, a few studies have attempted to unveil the genes and the underlying mechanism conferring biotic and abiotic stress or regulating the pathway of β-ODAP in grass pea. Proteomics has accelerated the identification studies on differential proteomes in response to salinity and low-temperature stress conditions for unveiling the common signaling pathways involved in mitigating these abiotic stresses and in discovering differentially regulated proteins. In grass pea, a metabolomics approach has been used to identify the metabolic processes associated with β-ODAP synthesis. Genome sequencing of grass pea is under way which is expected to be vital for whole-genome re-sequencing and gene annotation toward the identification of genes with novel functions. Recently, a draft genome sequence of grass pea was developed, and some efforts are underway to re-sequence a diverse panel of grass pea comprising 384 germplasm lines. Owing to the scantiness of a successful transformation protocol, research on the application of modern approaches of genome editing like the Clustered Regularly Interspaced Short Palindromic Repeats (CRISPR) or CRISPR-associated protein 9 (CRISPR/Cas9) system for the engineering of signaling pathways or regulatory mechanisms seeks immediate attention to reduce the β-ODAP content in seeds and to improve the potential agronomic traits in grass pea.