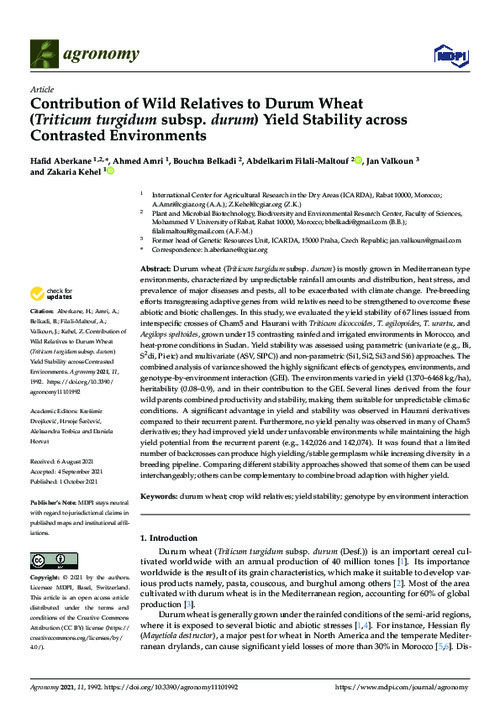 Durum wheat (Triticum turgidum subsp. durum) is mostly grown in Mediterranean type environments, characterized by unpredictable rainfall amounts and distribution, heat stress, and prevalence of major diseases and pests, all to be exacerbated with climate change. Pre-breeding efforts transgressing adaptive genes from wild relatives need to be strengthened to overcome these abiotic and biotic challenges. In this study, we evaluated the yield stability of 67 lines issued from interspecific crosses of Cham5 and Haurani with Triticum dicoccoides, T. agilopoides, T. urartu, and Aegilops speltoides, grown under 15 contrasting rainfed and irrigated environments in Morocco, and heat-prone conditions in Sudan. Yield stability was assessed using parametric (univariate (e.g., Bi, S2di, Pi etc) and multivariate (ASV, SIPC)) and non-parametric (Si1, Si2, Si3 and Si6) approaches. The combined analysis of variance showed the highly significant effects of genotypes, environments, and genotype-by-environment interaction (GEI). The environments varied in yield (1370–6468 kg/ha), heritability (0.08–0.9), and in their contribution to the GEI. Several lines derived from the four wild parents combined productivity and stability, making them suitable for unpredictable climatic conditions. A significant advantage in yield and stability was observed in Haurani derivatives compared to their recurrent parent. Furthermore, no yield penalty was observed in many of Cham5 derivatives; they had improved yield under unfavorable environments while maintaining the high yield potential from the recurrent parent (e.g., 142,026 and 142,074). It was found that a limited number of backcrosses can produce high yielding/stable germplasm while increasing diversity in a breeding pipeline. Comparing different stability approaches showed that some of them can be used interchangeably; others can be complementary to combine broad adaption with higher yield.