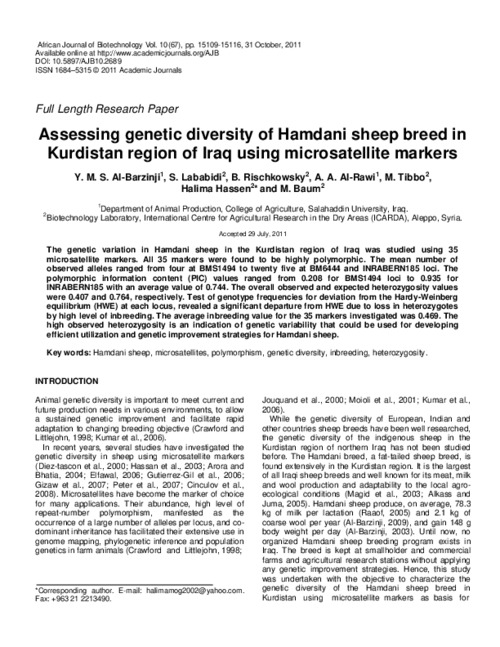 The genetic variation in Hamdani sheep in the Kurdistan region of Iraq was studied using 35 microsatellite markers. All 35 markers were found to be highly polymorphic. The mean number of observed alleles ranged from four at BMS1494 to twenty five at BM6444 and INRABERN185 loci. The polymorphic information content (PIC) values ranged from 0.208 for BMS1494 loci to 0.935 for INRABERN185 with an average value of 0.744. The overall observed and expected heterozygosity values were 0.407 and 0.764, respectively. Test of genotype frequencies for deviation from the Hardy-Weinberg equilibrium (HWE) at each locus, revealed a significant departure from HWE due to loss in heterozygotes by high level of inbreeding. The average inbreeding value for the 35 markers investigated was 0.469. The high observed heterozygosity is an indication of genetic variability that could be used for developing efficient utilization and genetic improvement strategies for Hamdani sheep.