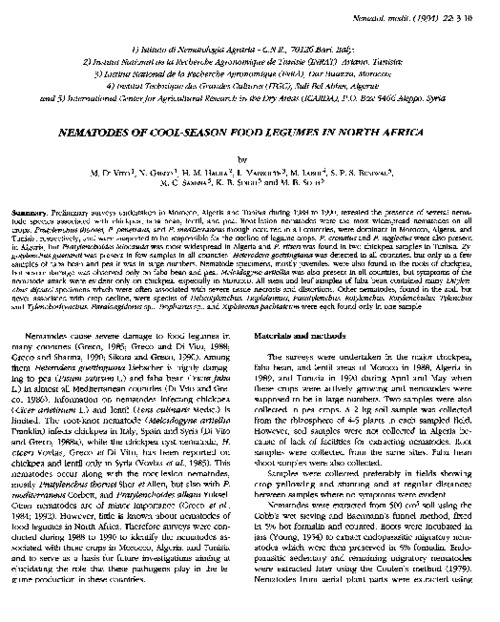 Preliminary surveys undertaken in Morocco, Algeria, and Tunisia during 1988 to 1990, revealed the presence of several nematode species associated with chickpea, faba bean, lentil, and pea. Root-lesion nematodes were the most widespread nematodes on all crops. Pratylenchus thomei, P. penetrans, and P. mediterraneus though occurred in all countries, were dominant in Morocco, Algeria, and Tunisia, respectively, and were suspected to be responsible for the decline of legume crops. P. crenatus and P. neglectus were also present in Algeria, but Pratylenchoides leiocauda was most widespread in Algeria and P. ritteri was found in two chickpea samples in Tunisia. Zygotylenchus guevarai was present in a few samples in all countries. Heterodera goettingiana was detected in all countries, but only in a few samples of faba bean and pea it was in large numbers. Nematode specimens, mostly juveniles, were also found in the roots of chickpea, but severe damage was observed only on faba bean and pea. Meloidogyne artiellia was also present in all countries, but symptoms of the nematode attack were evident only on chickpea, especially in Morocco. All stem and leaf samples of faba bean contained many Ditylenchus dipsaci specimens which were often associated with severe tissue necrosis and distortions. Other nematodes, found in the soil, but never associated with crop decline, were species of Helicotylenchus, Hoplolaimus, Paratylenchus, Rotylenchus, Rotylenchulus, Tylenchus, and Tylenchorhynchus. Paralongidorus sp., Trophurus sp., and Xphinema pachtaicum were each found only in one sample.