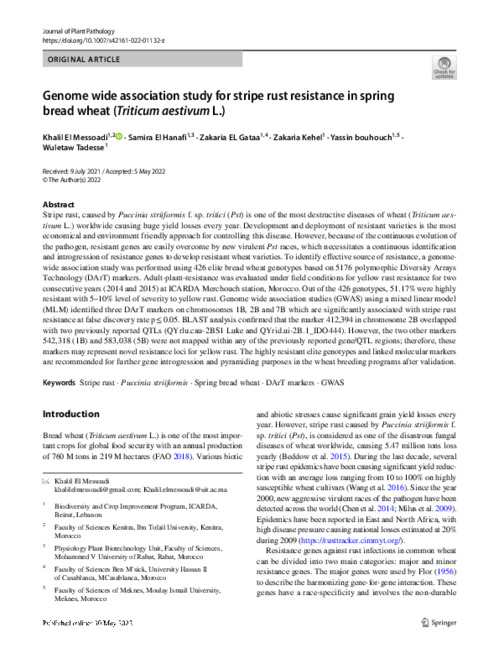 Stripe rust, caused by Puccinia striiformis f. sp. tritici (Pst) is one of the most destructive diseases of wheat (Triticum aes- tivum L.) worldwide causing huge yield losses every year. Development and deployment of resistant varieties is the most economical and environment friendly approach for controlling this disease. However, because of the continuous evolution of the pathogen, resistant genes are easily overcome by new virulent Pst races, which necessitates a continuous identifcation and introgression of resistance genes to develop resistant wheat varieties. To identify efective source of resistance, a genome- wide association study was performed using 426 elite bread wheat genotypes based on 5176 polymorphic Diversity Arrays Technology (DArT) markers. Adult-plant-resistance was evaluated under feld conditions for yellow rust resistance for two consecutive years (2014 and 2015) at ICARDA Merchouch station, Morocco. Out of the 426 genotypes, 51.17% were highly resistant with 5–10% level of severity to yellow rust. Genome wide association studies (GWAS) using a mixed linear model (MLM) identifed three DArT markers on chromosomes 1B, 2B and 7B which are signifcantly associated with stripe rust resistance at false discovery rate p≤0.05. BLAST analysis confrmed that the marker 412,394 in chromosome 2B overlapped with two previously reported QTLs (QYrlu.cau-2BS1 Luke and QYrid.ui-2B.1_IDO444). However, the two other markers 542,318 (1B) and 583,038 (5B) were not mapped within any of the previously reported gene/QTL regions; therefore, these markers may represent novel resistance loci for yellow rust. The highly resistant elite genotypes and linked molecular markers are recommended for further gene introgression and pyramiding purposes in the wheat breeding programs after validation.