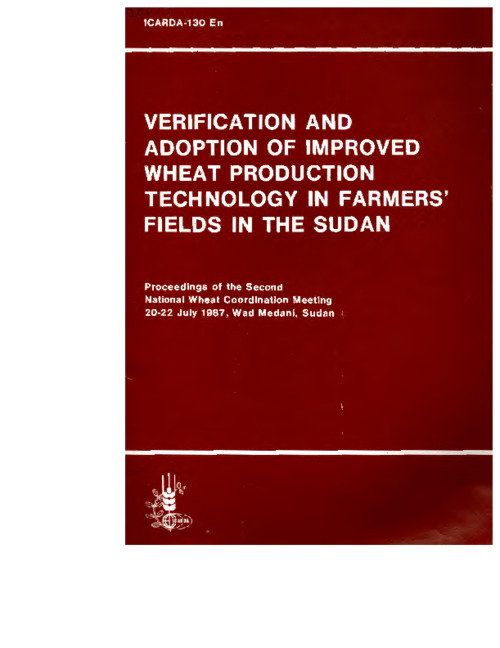 Results from large-scale farmer-managed demonstrations and trials indicated that 1986/87 was a second fruitful year for the OPEC-funded joint Sudan/ ICARDA Pilot Project for the Verification and Adoption of Improved Wheat Production Technology in Sudan. Substantial yield increases were achieved where production technology was appropriately transferred from research stations to farmers' fields. Scientists participating in the project held their second annual meet¬ing on 20-22 July 1987, at Wad Medani, Sudan, to discuss the results from the 1986/87 season and develop a work plan for 1987/88. Although the results presented in these proceedings speak for themselves, 1 would like to congratulate the project's participants on the impressive achievements which could not have been possible without their devotion and dedication. The active role played by the farmers and extension staff is commendable and of major impor¬tance, and 1 am confident that their direct involvement in implementing the project will speed up the adoption and use of new or improved technology in their fields. The project also supported the training of several young scientists on various topics of relevance as well as graduate studies; two senior scientists spent 3 months at ICARDA working closely with their colleagues in the Cereal Improvement Program. We at ICARDA are happy to see the progress the project is making under the leadership of the Sudanese national program towards its ultimate goal: self-sufficiency in wheat production. We congratulate the Sudanese authori¬ties for their keen interest and painstaking efforts in implementing the pro¬ject. OPEC's decision to extend its support to cover the 1987188 seasons is evidence of its deep concern for agricultural development in the area.1 hope these proceedings will be useful to all those involved in wheat production in Sudan, as well as to others engaged in similar efforts in other developing countries.