The Gap between Present Farm Yield and the Potential: Major Constraints and Possible Solutions-Volume I 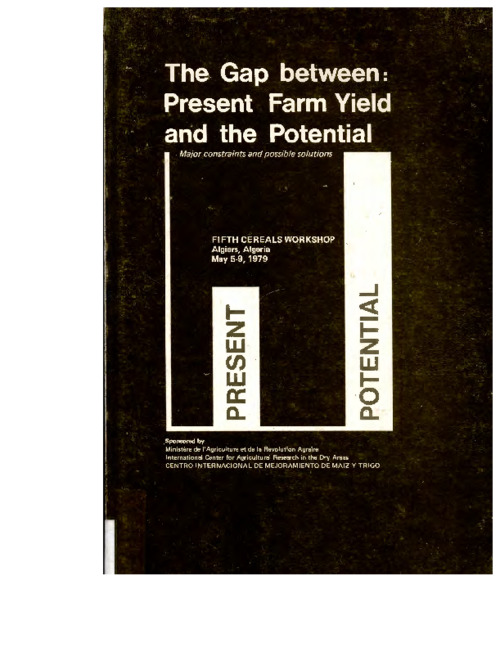 The prospects of the green revolution have delayed or averted the Malthusian principle coming into operation. Also, it has evoked hope for many developing countries. Crop yields are dependent on interactions of socio-economical, biological, technological, and ecological factors. Man has varying degrees of control over these interacting factors High crop yields from experimental stations are reported almost every year. However, the actual farm yields are still very low. Thus, this workshop is the fifth in a series of regional workshops, which was initiated in 1972 by ALAD. CIMMYT, FA0, and other international development agencies in an attempt to provide a forum for the exchange of information. was undertaken with the aim of reviewing the present farm yields and the potential major constraints and possible solutions. The philosophy behind these workshops has been to bring together active cereal research workers every two years to focus on issues that currently need attention and to review the most recent research results which could be used by colleagues concerned with cereal improvement in the countries of this region-West Asia and North Africa. This workshop in Algiers from May 5 to 9. 1979 was jointly organized by the Ministry of Agriculture antiquarian Revolution of the Government of Algeria. the International Maize and Wheat 1mprovement Center (CIMMYT) and the International Center for Agricultural Research in the Dry Areas (ICARDA). Close to 140 scientists representing 25 countries of this region, many international development agencies, and well-recognized authorities in cereal production from other parts of the world attended the workshop. The first day's proceedings were fully devoted to reports from the various participating countries presenting the current status of cereal production, problems, and prospects. On the second day, the workshop opened with three major presentations covering agronomic constraints, transfer of technology, and economic and policy constraints. These topics were then analyzed in-depth in three parallel sessions. During the third day, the participants visited on-farm demonstrations and trials conducted by the IDGC staff in the will yet of El Assam The last two days of the workshop were devoted to analysis,s of the specific problem areas such as weed control, cropping systems, agronomic practices, fertilizer usage, seed multiplication, and related topics.