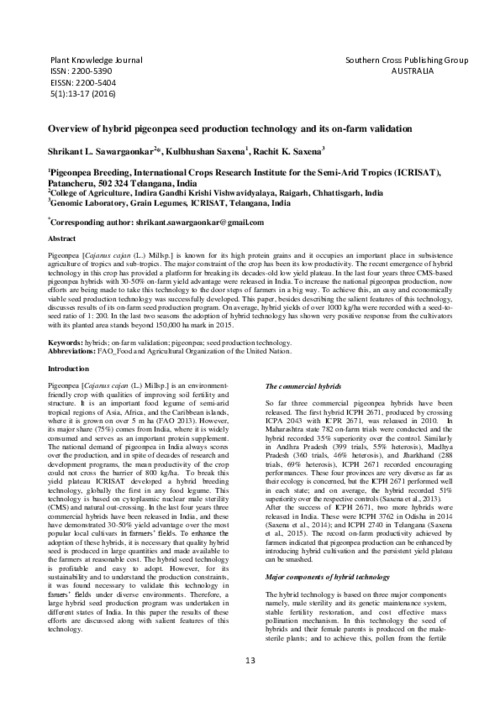 Pigeonpea [Cajanus cajan (L.) Millsp.] is known for its high protein grains and it occupies an important place in subsistence agriculture of tropics and sub-tropics. The major constraint of the crop has been its low productivity. The recent emergence of hybrid technology in this crop has provided a platform for breaking its decades-old low yield plateau. In the last four years three CMS-based pigeonpea hybrids with 30-50% on-farm yield advantage were released in India. To increase the national pigeonpea production, now efforts are being made to take this technology to the door steps of farmers in a big way. To achieve this, an easy and economically viable seed production technology was successfully developed. This paper, besides describing the salient features of this technology, discusses results of its on-farm seed production program. On average, hybrid yields of over 1000 kg/ha were recorded with a seed-toseed ratio of 1: 200. In the last two seasons the adoption of hybrid technology has shown very positive response from the cultivators with its planted area stands beyond 150,000 ha mark in 2015.