Crop Production in Lebanon: Proceedings of a Research Conference 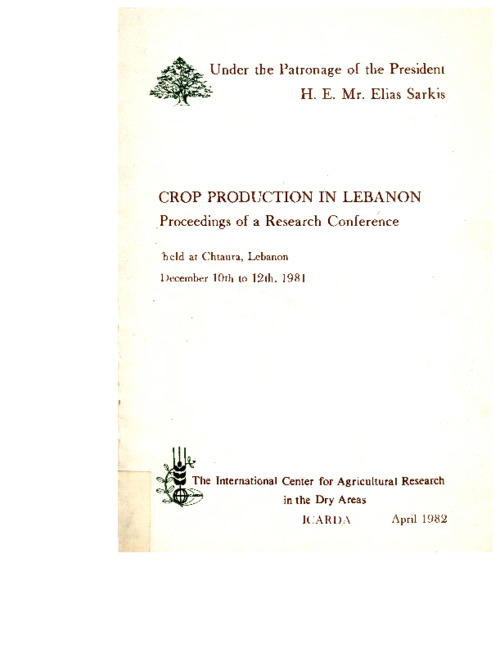 This document attempts to summarise the proceedings of the Research Conference on Crop Production in Lebanon, which was held in the Mas sabki Hotel in Chtaura, Lebanon from December 10th to 12th, 1981, under the patronage of the President of the Republic, Mr. Elias Sarkis. The The conference was sponsored by ICARDA and was attended by over 60 participants, representing a balance between scientists from national institutions in Lebanon and ICARDA staff. ICARDA has been actively involved in research at its stations in Le banon since its establishment in 1977. ICARDA's activities aim at increasing food productivity and the welfare of rural communities in the Middle East and North Africa region. To better achieve these aims, it was perceived by the Lebanese national institutions and ICARBA that there was a need to discuss, co-ordinate and launch a joint program of work. To this end, this conference was organized in order to: 1, discuss relevant past research and dev~:opment which can be used as a bdse for future collaboration; 2. identify constraints that need to be resolved; 3, formulatc collaborative research programs that can be implemented jointly by national and international institutions, including ICAKDA. As a base for discussions at the Conference, a series of research presentation documents were prepared. These papers have here been summarised so that the focus on the recommendations arising out of the Conference can become more apparent, and in order to speed the process of publication. It is hoped that authors will appreciate that it has not been possible to publish their papers in full and that they will accept the limitations of the summaries presented here.