The Lentil Genome – from the sequencer to the field 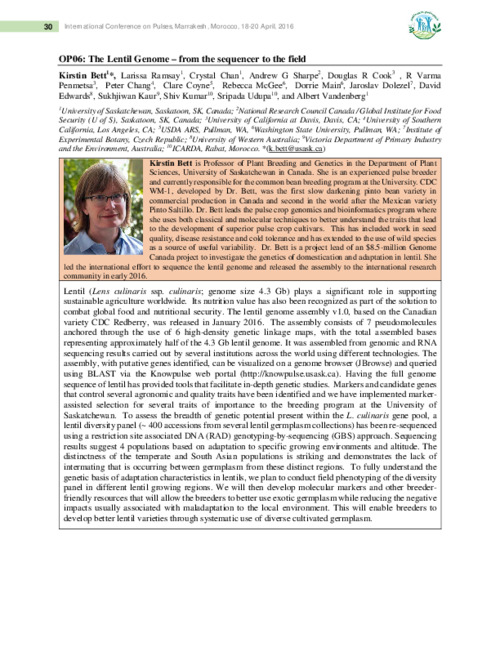 Lentil (Lens culinaris ssp. culinaris; genome size 4.3 Gb) plays a significant role in supporting sustainable agriculture worldwide. Its nutrition value has also been recognized as part of the solution to combat global food and nutritional security. The lentil genome assembly v1.0, based on the Canadian variety CDC Redberry, was released in January 2016. The assembly consists of 7 pseudomolecules anchored through the use of 6 high-density genetic linkage maps, with the total assembled bases representing approximately half of the 4.3 Gb lentil genome. It was assembled from genomic and RNA sequencing results carried out by several institutions across the world using different technologies. The assembly, with putative genes identified, can be visualized on a genome browser (JBrowse) and queried using BLAST via the Knowpulse web portal (http://knowpulse.usask.ca). Having the full genome sequence of lentil has provided tools that facilitate in-depth genetic studies. Markers and candidate genes that control several agronomic and quality traits have been identified and we have implemented markerassisted selection for several traits of importance to the breeding program at the University of Saskatchewan. To assess the breadth of genetic potential present within the L. culinaris gene pool, a lentil diversity panel (~ 400 accessions from several lentil germplasm collections) has been re-sequenced using a restriction site associated DNA (RAD) genotyping-by-sequencing (GBS) approach. Sequencing results suggest 4 populations based on adaptation to specific growing environments and altitude. The distinctness of the temperate and South Asian populations is striking and demonstrates the lack of intermating that is occurring between germplasm from these distinct regions. To fully understand the genetic basis of adaptation characteristics in lentils, we plan to conduct field phenotyping of the diversity panel in different lentil growing regions. We will then develop molecular markers and other breederfriendly resources that will allow the breeders to better use exotic germplasm while reducing the negative impacts usually associated with maladaptation to the local environment. This will enable breeders to develop better lentil varieties through systematic use of diverse cultivated germplasm.