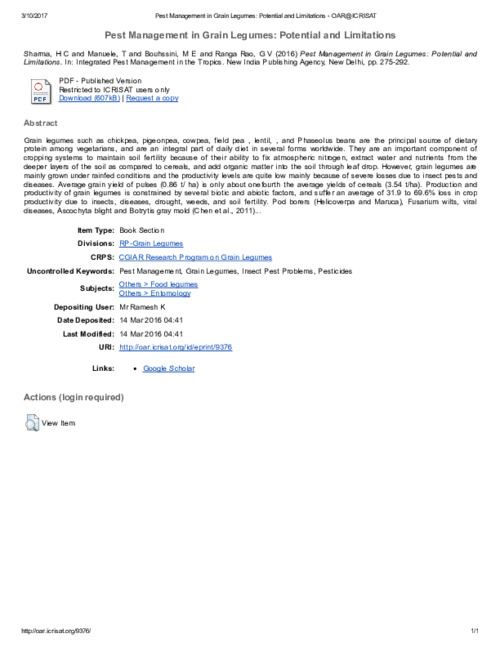 Grain legumes such as chickpea, pigeonpea, cowpea, field pea , lentil, , and Phaseolus beans are the principal source of dietary protein among vegetarians, and are an integral part of daily diet in several forms worldwide. They are an important component of cropping systems to maintain soil fertility because of their ability to fix atmospheric nitrogen, extract water and nutrients from the deeper layers of the soil as compared to cereals, and add organic matter into the soil through leaf drop. However, grain legumes are mainly grown under rainfed conditions and the productivity levels are quite low mainly because of severe losses due to insect pests and diseases. Average grain yield of pulses (0.86 t/ ha) is only about onefourth the average yields of cereals (3.54 t/ha). Production and productivity of grain legumes is constrained by several biotic and abiotic factors, and suffer an average of 31.9 to 69.6% loss in crop productivity due to insects, diseases, drought, weeds, and soil fertility. Pod borers (Helicoverpa and Maruca), Fusarium wilts, viral diseases, Ascochyta blight and Botrytis gray mold (Chen et al., 2011).