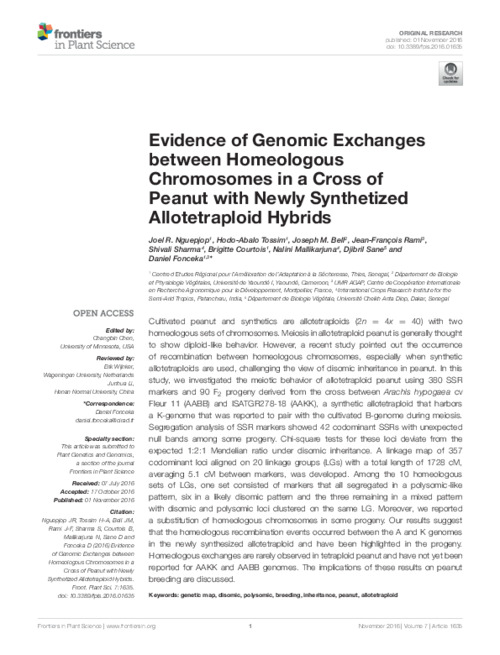 Cultivated peanut and synthetics are allotetraploids (2n D 4x D 40) with two homeologous sets of chromosomes. Meiosis in allotetraploid peanut is generally thought to show diploid-like behavior. However, a recent study pointed out the occurrence of recombination between homeologous chromosomes, especially when synthetic allotetraploids are used, challenging the view of disomic inheritance in peanut. In this study, we investigated the meiotic behavior of allotetraploid peanut using 380 SSR markers and 90 F2 progeny derived from the cross between Arachis hypogaea cv Fleur 11 (AABB) and ISATGR278-18 (AAKK), a synthetic allotetraploid that harbors a K-genome that was reported to pair with the cultivated B-genome during meiosis. Segregation analysis of SSR markers showed 42 codominant SSRs with unexpected null bands among some progeny. Chi-square tests for these loci deviate from the expected 1:2:1 Mendelian ratio under disomic inheritance. A linkage map of 357 codominant loci aligned on 20 linkage groups (LGs) with a total length of 1728 cM, averaging 5.1 cM between markers, was developed. Among the 10 homeologous sets of LGs, one set consisted of markers that all segregated in a polysomic-like pattern, six in a likely disomic pattern and the three remaining in a mixed pattern with disomic and polysomic loci clustered on the same LG. Moreover, we reported a substitution of homeologous chromosomes in some progeny. Our results suggest that the homeologous recombination events occurred between the A and K genomes in the newly synthesized allotetraploid and have been highlighted in the progeny. Homeologous exchanges are rarely observed in tetraploid peanut and have not yet been reported for AAKK and AABB genomes. The implications of these results on peanut breeding are discussed.