A Case for Regular Aflatoxin Monitoring in Peanut Butter in Sub-Saharan Africa: Lessons from a 3-Year Survey in Zambia 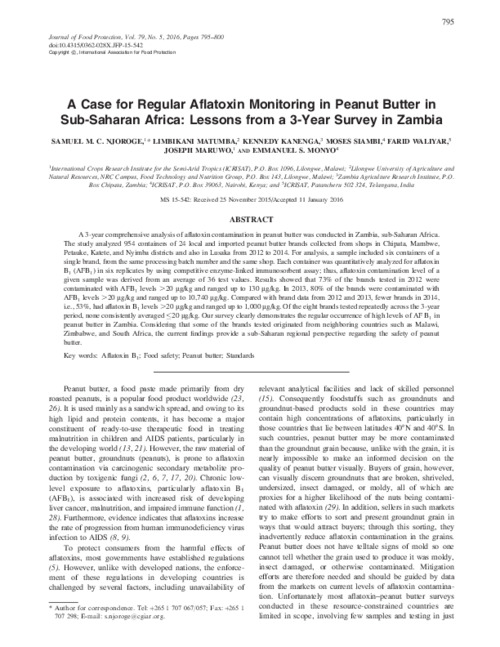 A 3-year comprehensive analysis of aflatoxin contamination in peanut butter was conducted in Zambia, sub-Saharan Africa. The study analyzed 954 containers of 24 local and imported peanut butter brands collected from shops in Chipata, Mambwe, Petauke, Katete, and Nyimba districts and also in Lusaka from 2012 to 2014. For analysis, a sample included six containers of a single brand, from the same processing batch number and the same shop. Each container was quantitatively analyzed for aflatoxin B1 (AFB1) in six replicates by using competitive enzyme-linked immunosorbent assay; thus, aflatoxin contamination level of a given sample was derived from an average of 36 test values. Results showed that 73% of the brands tested in 2012 were contaminated with AFB1 levels .20 lg/kg and ranged up to 130 lg/kg. In 2013, 80% of the brands were contaminated with AFB1 levels .20 lg/kg and ranged up to 10,740 lg/kg. Compared with brand data from 2012 and 2013, fewer brands in 2014, i.e., 53%, had aflatoxin B1 levels .20 lg/kg and ranged up to 1,000 lg/kg. Of the eight brands tested repeatedly across the 3-year period, none consistently averaged 20 lg/kg. Our survey clearly demonstrates the regular occurrence of high levels of AF B1 in peanut butter in Zambia. Considering that some of the brands tested originated from neighboring countries such as Malawi, Zimbabwe, and South Africa, the current findings provide a sub-Saharan regional perspective regarding the safety of peanut butter.