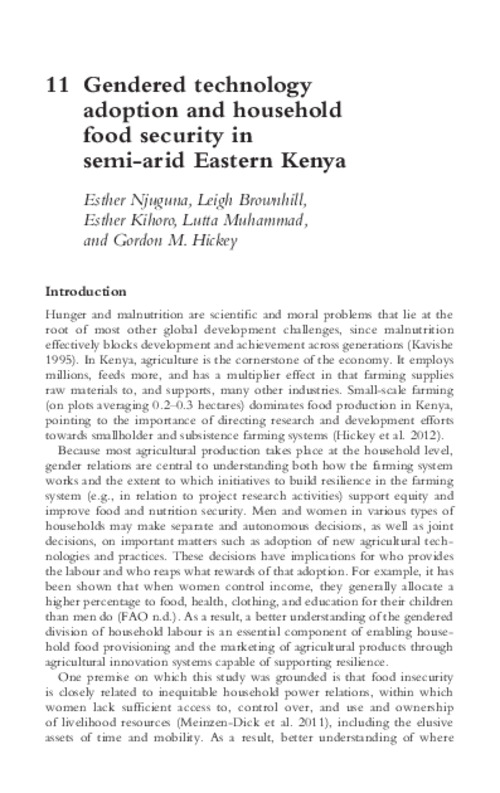 Hunger and malnutrition are scientific and moral problems that lie at the root of most other global development challenges, since malnutrition effectively blocks development and achievement across generations (Kavishe 1995). In Kenya, agriculture is the cornerstone of the economy. It employs millions, feeds more, and has a multiplier effect in that farming supplies raw materials to, and supports, many other industries. Smallscale farming (on plots averaging 0.2–0.3 hectares) dominates food production in Kenya, pointing to the importance of directing research and development efforts towards smallholder and subsistence farming systems (Hickey et al. 2012). Because most agricultural production takes place at the household level, gender relations are central to understanding both how the farming system works and the extent to which initiatives to build resilience in the farming system (e.g., in relation to project research activities) support equity and improve food and nutrition security. Men and women in various types of households may make separate and autonomous decisions, as well as joint decisions, on important matters such as adoption of new agricultural technologies and practices. These decisions have implications for who provides the labour and who reaps what rewards of that adoption. For example, it has been shown that when women control income, they generally allocate a higher percentage to food, health, clothing, and education for their children than men do (FAO n.d.). As a result, a better understanding of the gendered division of household labour is an essential component of enabling household food provisioning and the marketing of agricultural products through agricultural innovation systems capable of supporting resilience...