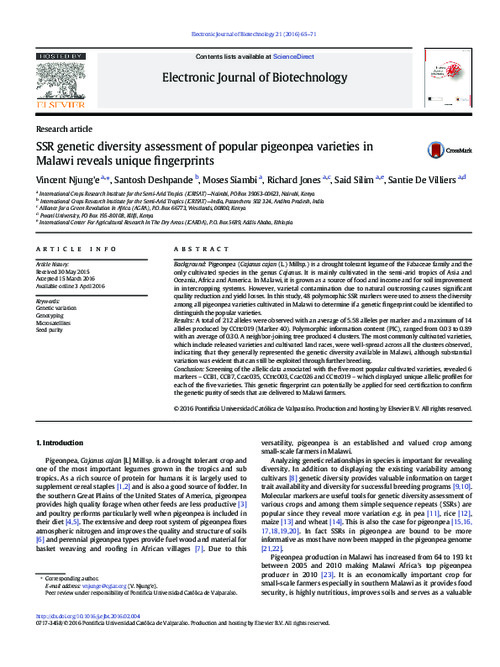 Background: Pigeonpea (Cajanus cajan (L.) Millsp.) is a drought tolerant legume of the Fabaceae family and the only cultivated species in the genus Cajanus. It is mainly cultivated in the semi-arid tropics of Asia and Oceania, Africa and America. In Malawi, it is grown as a source of food and income and for soil improvement in intercropping systems. However, varietal contamination due to natural outcrossing causes significant quality reduction and yield losses. In this study, 48 polymorphic SSR markers were used to assess the diversity among all pigeonpea varieties cultivated in Malawi to determine if a genetic fingerprint could be identified to distinguish the popular varieties. Results: A total of 212 alleles were observed with an average of 5.58 alleles per marker and a maximum of 14 alleles produced by CCttc019 (Marker 40). Polymorphic information content (PIC), ranged from 0.03 to 0.89 with an average of 0.30. A neighbor-joining tree produced 4 clusters. The most commonly cultivated varieties, which include released varieties and cultivated land races, were well-spread across all the clusters observed, indicating that they generally represented the genetic diversity available in Malawi, although substantial variation was evident that can still be exploited through further breeding. Conclusion: Screening of the allelic data associated with the five most popular cultivated varieties, revealed 6 markers – CCB1, CCB7, Ccac035, CCttc003, Ccac026 and CCttc019 – which displayed unique allelic profiles for each of the five varieties. This genetic fingerprint can potentially be applied for seed certification to confirm the genetic purity of seeds that are delivered to Malawi farmers