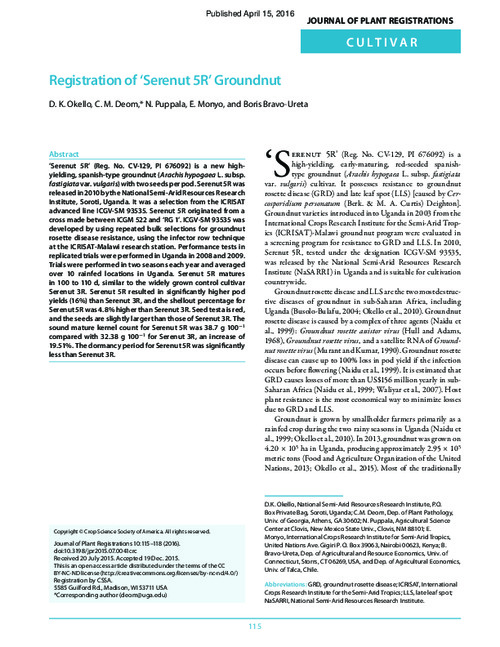 ’Serenut 5R’ (Reg. No. CV-129, PI 676092) is a new highyielding, spanish-type groundnut (Arachis hypogaea L. subsp. fastigiata var. vulgaris) with two seeds per pod. Serenut 5R was released in 2010 by the National Semi-Arid Resources Research Institute, Soroti, Uganda. It was a selection from the ICRISAT advanced line ICGV-SM 93535. Serenut 5R originated from a cross made between ICGM 522 and ‘RG 1’. ICGV-SM 93535 was developed by using repeated bulk selections for groundnut rosette disease resistance, using the infector row technique at the ICRISAT-Malawi research station. Performance tests in replicated trials were performed in Uganda in 2008 and 2009. Trials were performed in two seasons each year and averaged over 10 rainfed locations in Uganda. Serenut 5R matures in 100 to 110 d, similar to the widely grown control cultivar Serenut 3R. Serenut 5R resulted in significantly higher pod yields (16%) than Serenut 3R, and the shellout percentage for Serenut 5R was 4.8% higher than Serenut 3R. Seed testa is red, and the seeds are slightly larger than those of Serenut 3R. The sound mature kernel count for Serenut 5R was 38.7 g 100-1 compared with 32.38 g 100-1 for Serenut 3R, an increase of 19.51%. The dormancy period for Serenut 5R was significantly less than Serenut 3R.