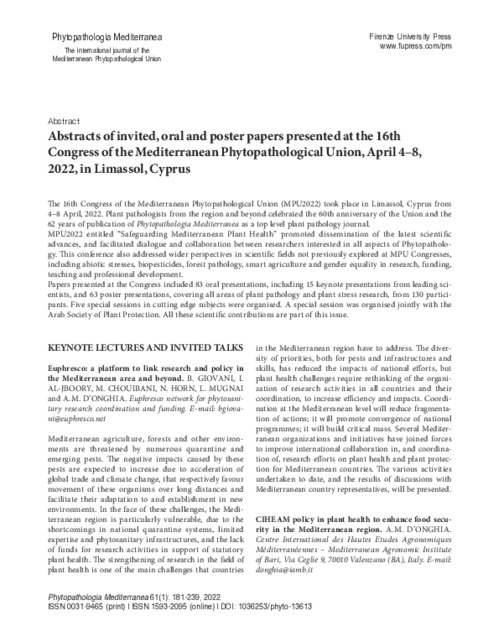 In the Arab and Mediterranean regions, cool-season food legumes (chickpea, faba bean, lentil and pea) are infected naturally by many viruses, and the number of viruses involved continues to increase. However, at any specific location only a few of these pathogens are of economic concern. Yield losses resulting from virus attack vary widely, from little, as in the case of Broad bean mottle virus in Tunisia and Morocco, to complete crop failure when conditions permit widespread virus infection at the vulnerable early plant growth stage, as with Faba bean necrotic yellows virus in Egypt and Syria. Cereal crops (wheat, barley and oat) in Arab and Mediterranean regions are also affected by viruses, mainly Barley yellow dwarf virus-PAV, and this virus is reported to occur at epidemic levels in only Algeria, Morocco and Tunisia. Epidemic spread of most viral diseases was always associated with high vector populations and activity. Although virus disease management can be achieved through the combined effects of several approaches, development of resistant genotypes is one of the most promising control components. Experience over the last few decades has clearly showed that no single method of virus disease control reduces yield losses in legume crops. Some progress was made on the disease management of some legume and cereal viruses using combinations of healthy seed, host resistance, cultural practices (such as adjustments of planting date and plant density, and roguing of infected plants early in the season) and chemical control virus vectors.