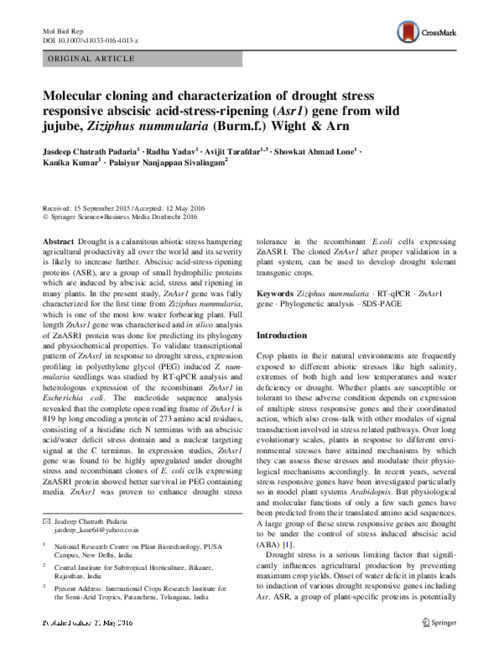 Drought is a calamitous abiotic stress hampering agricultural productivity all over the world and its severity is likely to increase further. Abscisic acidstressripening proteins (ASR), are a group of small hydrophilic proteins which are induced by abscisic acid, stress and ripening in many plants. In the present study, ZnAsr 1 gene was fully characterized for the first time from Ziziphus nummularia, which is one of the most low water forbearing plant. Full length ZnAsr 1 gene was characterised and in silico analysis of ZnASR1 protein was done for predicting its phylogeny and physiochemical properties. To validate transcriptional pattern of ZnAsr 1 in response to drought stress, expression profiling in polyethylene glycol (PEG) induced Z. nummularia seedlings was studied by RTqPCR analysis and heterologous expression of the recombinant ZnAsr1 in Escherichia coli. The nucleotide sequence analysis revealed that the complete open reading frame of ZnAsr 1 is 819 bp long encoding a protein of 273 amino acid residues, consisting of a histidine rich N terminus with an abscisic acid/water deficit stress domain and a nuclear targeting signal at the C terminus. In expression studies, ZnAsr 1 gene was found to be highly upregulated under drought stress and recombinant clones of E. coli cells expressing ZnASR1 protein showed better survival in PEG containing media. ZnAsr1 was proven to enhance drought stress tolerance in the recombinant E.coli cells expressing ZnASR1. The cloned ZnAsr1 after proper validation in a plant system, can be used to develop drought tolerant transgenic crops.