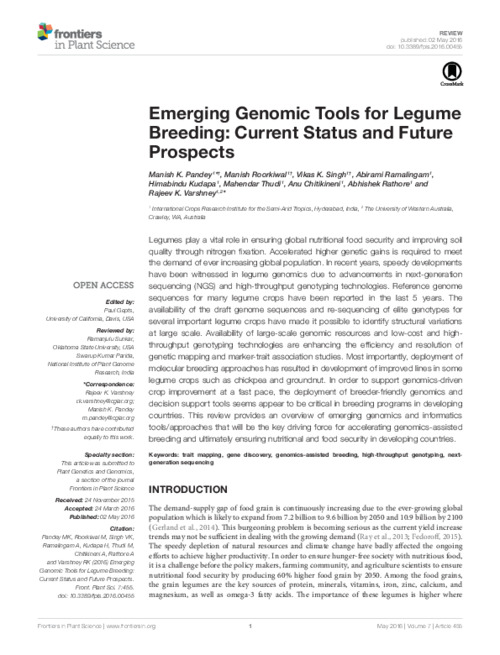 Legumes play a vital role in ensuring global nutritional food security and improving soil quality through nitrogen fixation. Accelerated higher genetic gains is required to meet the demand of ever increasing global population. In recent years, speedy developments have been witnessed in legume genomics due to advancements in next-generation sequencing (NGS) and high-throughput genotyping technologies. Reference genome sequences for many legume crops have been reported in the last 5 years. The availability of the draft genome sequences and re-sequencing of elite genotypes for several important legume crops have made it possible to identify structural variations at large scale. Availability of large-scale genomic resources and low-cost and highthroughput genotyping technologies are enhancing the efficiency and resolution of genetic mapping and marker-trait association studies. Most importantly, deployment of molecular breeding approaches has resulted in development of improved lines in some legume crops such as chickpea and groundnut. In order to support genomics-driven crop improvement at a fast pace, the deployment of breeder-friendly genomics and decision support tools seems appear to be critical in breeding programs in developing countries. This review provides an overview of emerging genomics and informatics tools/approaches that will be the key driving force for accelerating genomics-assisted breeding and ultimately ensuring nutritional and food security in developing countries