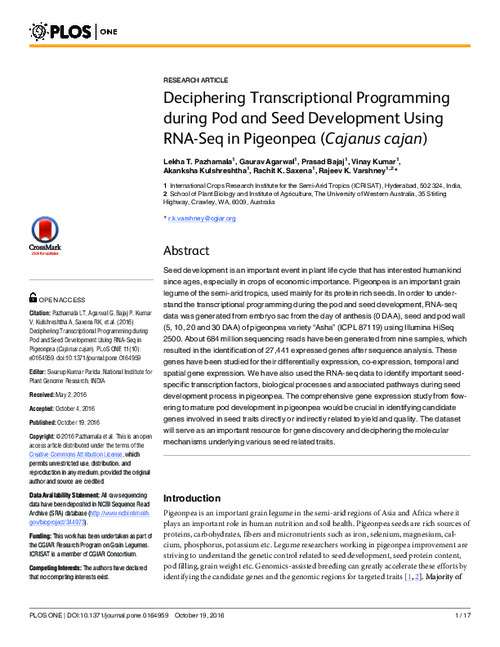 Seed development is an important event in plant life cycle that has interested humankind since ages, especially in crops of economic importance. Pigeonpea is an important grain legume of the semi-arid tropics, used mainly for its protein rich seeds. In order to understand the transcriptional programming during the pod and seed development, RNA-seq data was generated from embryo sac from the day of anthesis (0 DAA), seed and pod wall (5, 10, 20 and 30 DAA) of pigeonpea variety ªAshaº (ICPL 87119) using Illumina HiSeq 2500. About 684 million sequencing reads have been generated from nine samples, which resulted in the identification of 27,441 expressed genes after sequence analysis. These genes have been studied for their differentially expression, co-expression, temporal and spatial gene expression. We have also used the RNA-seq data to identify important seedspecific transcription factors, biological processes and associated pathways during seed development process in pigeonpea. The comprehensive gene expression study from flowering to mature pod development in pigeonpea would be crucial in identifying candidate genes involved in seed traits directly or indirectly related to yield and quality. The dataset will serve as an important resource for gene discovery and deciphering the molecular mechanisms underlying various seed related traits.