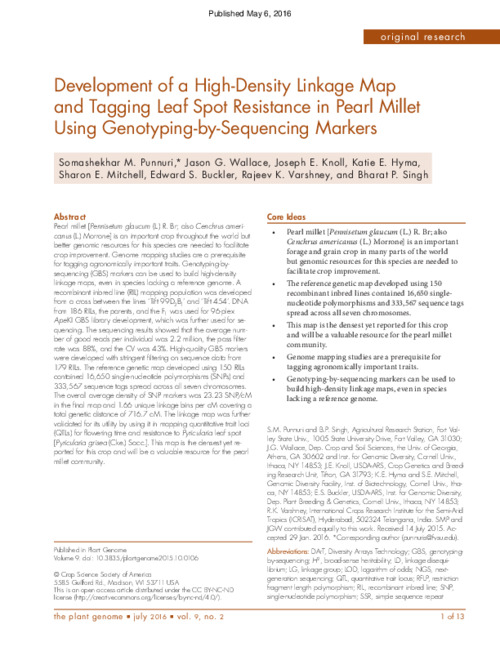 Pearl millet [Pennisetum glaucum (L.) R. Br; also Cenchrus americanus (L.) Morrone] is an important crop throughout the world but better genomic resources for this species are needed to facilitate crop improvement. Genome mapping studies are a prerequisite for tagging agronomically important traits. Genotyping-bysequencing (GBS) markers can be used to build high-density linkage maps, even in species lacking a reference genome. A recombinant inbred line (RIL) mapping population was developed from a cross between the lines ‘Tift 99D2B1’ and ‘Tift 454’. DNA from 186 RILs, the parents, and the F1 was used for 96-plex ApeKI GBS library development, which was further used for sequencing. The sequencing results showed that the average number of good reads per individual was 2.2 million, the pass filter rate was 88%, and the CV was 43%. High-quality GBS markers were developed with stringent filtering on sequence data from 179 RILs. The reference genetic map developed using 150 RILs contained 16,650 single-nucleotide polymorphisms (SNPs) and 333,567 sequence tags spread across all seven chromosomes. The overall average density of SNP markers was 23.23 SNP/cM in the final map and 1.66 unique linkage bins per cM covering a total genetic distance of 716.7 cM. The linkage map was further validated for its utility by using it in mapping quantitative trait loci (QTLs) for flowering time and resistance to Pyricularia leaf spot [Pyricularia grisea (Cke.) Sacc.]. This map is the densest yet reported for this crop and will be a valuable resource for the pearl millet community.