An Update on Genetic Resistance of Chickpea to Ascochyta Blight 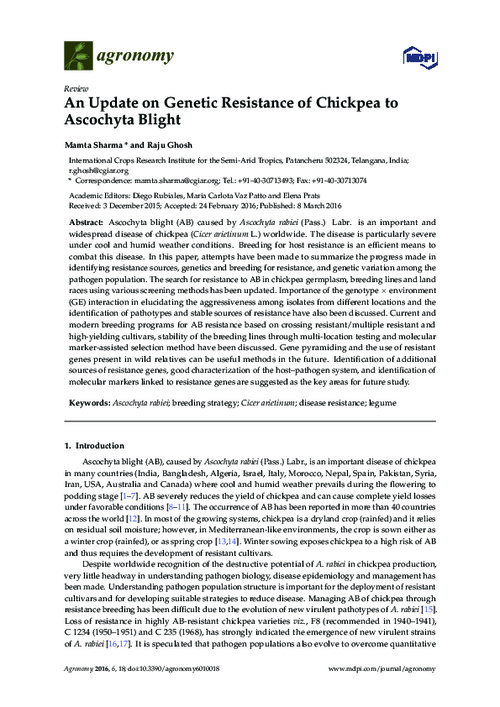 Ascochyta blight (AB) caused by Ascochyta rabiei (Pass.) Labr. is an important and widespread disease of chickpea (Cicer arietinum L.) worldwide. The disease is particularly severe under cool and humid weather conditions. Breeding for host resistance is an efﬁcient means to combat this disease. In this paper, attempts have been made to summarize the progress made in identifying resistance sources, genetics and breeding for resistance, and genetic variation among the pathogen population. The search for resistance to AB in chickpea germplasm, breeding lines and land races using various screening methods has been updated. Importance of the genotype environment (GE) interaction in elucidating the aggressiveness among isolates from different locations and the identiﬁcation of pathotypes and stable sources of resistance have also been discussed. Current and modern breeding programs for AB resistance based on crossing resistant/multiple resistant and high-yielding cultivars, stability of the breeding lines through multi-location testing and molecular marker-assisted selection method have been discussed. Gene pyramiding and the use of resistant genes present in wild relatives can be useful methods in the future. Identiﬁcation of additional sources of resistance genes, good characterization of the host–pathogen system, and identiﬁcation of molecular markers linked to resistance genes are suggested as the key areas for future study.