Better understanding the realities, viewpoints, aspirations and challenges of rural youth living in the agricultural dryland areas in the Province of Midelt, Morocco 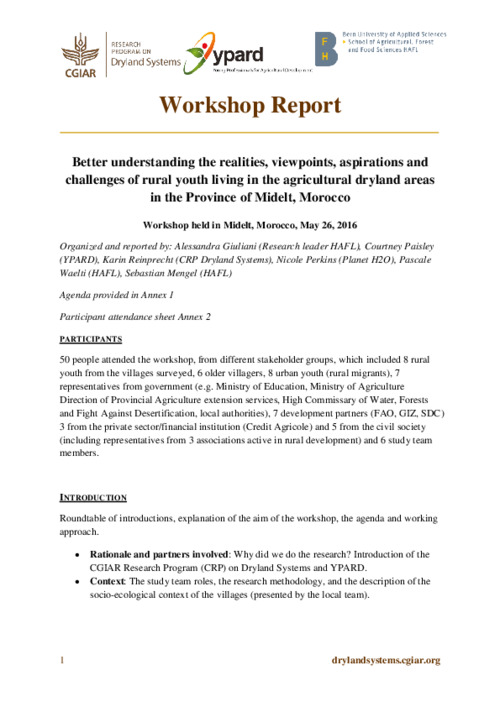 Alessandra Giuliani. (31/12/2016). Better understanding the realities, viewpoints, aspirations and challenges of rural youth living in the agricultural dryland areas in the Province of Midelt, Morocco.

Education: highest illiteracy rate (40%) is found among youth living in the pastoral ALS. Illiteracy rate is also higher among young women (30% instead of 18% among young men) • Source of living: the first source of living is work on the family farm for irrigated and rainfed ALS. In the pastoral ALS, 64% of youths rely on sedentary herding, and 36% on nomadic herding. No youth interviewee generates his/her income from his/her own farm or agribusiness • Infrastructure: it is difficult to get goods to the market and to bring in agricultural inputs from suppliers • Associations/cooperatives: Many youth are not part of an association. Youth said there were no local associations/cooperatives to join, or they did not have the time, they were corrupt or ineffective, or they did not know how to do it. There was a reticence to be part of a cooperative. How do we then reach these young people? • Value Addition: 25% were involved in value added in agriculture. This was mostly in packaging produce. Very little had access to cold storage, a few were involved in wool production and dairy production • Perceptions of agriculture: Many people said they had a neutral vision of agriculture, although when pushed for further information, many indicated they were interested in owning farms, but they also said it was difficult work with low returns. • Decision making structures showed that the majority of young women were very much excluded. It was found that education had little correlation with decision making • Migration: many said that it was not an option. Not necessarily that they did not think of it but rather that it was not an option for them for various reasons. Those who did want to leave cited lack of opportunities. Many young people want to stay, in particular with improved conditions. But how long will they want to stay if things do not improve? • Innovation – mostly drip irrigation. Many indicated they did not know how to develop innovation • The research looked at both challenges and solutions and dreams and aspirations, by gender. Many did want to own their own farms – how can we support them? • The research looked also at the perspectives of other people (parents, older villagers, government, agribusiness, cooperatives) and urban youth as well as focus group discussions on the ‘village of your dreams’