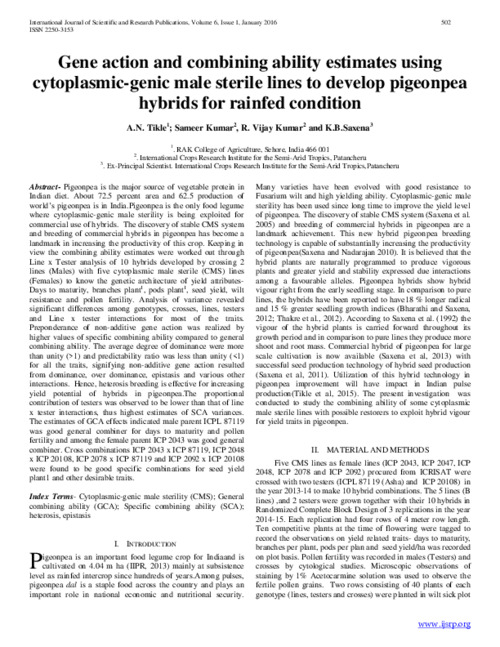 Pigeonpea is the major source of vegetable protein in Indian diet. About 72.5 percent area and 62.5 production of world’s pigeonpea is in India.Pigeonpea is the only food legume where cytoplasmic-genic male sterility is being exploited for commercial use of hybrids. The discovery of stable CMS system and breeding of commercial hybrids in pigeonpea has become a landmark in increasing the productivity of this crop. Keeping in view the combining ability estimates were worked out through Line x Tester analysis of 10 hybrids developed by crossing 2 lines (Males) with five cytoplasmic male sterile (CMS) lines (Females) to know the genetic architecture of yield attributes- Days to maturity, branches plant 1 , pods plant 1 , seed yield, wilt resistance and pollen fertility. Analysis of variance revealed significant differences among genotypes, crosses, lines, testers and Line x tester interactions for most of the traits. Preponderance of non-additive gene action was realized by higher values of specific combining ability compared to general combining ability. The average degree of dominance were more than unity (>1) and predictability ratio was less than unity (<1) for all the traits, signifying non-additive gene action resulted from dominance, over dominance, epistasis and various other interactions. Hence, heterosis breeding is effective for increasing yield potential of hybrids in pigeonpea.The proportional contribution of testers was observed to be lower than that of line x tester interactions, thus highest estimates of SCA variances. The estimates of GCA effects indicated male parent ICPL 87119 was good general combiner for days to maturity and pollen fertility and among the female parent ICP 2043 was good general combiner. Cross combinations ICP 2043 x ICP 87119, ICP 2048 x ICP 20108, ICP 2078 x ICP 87119 and ICP 2092 x ICP 20108 were found to be good specific combinations for seed yield plant1 and other desirable traits.