Evolution and impacts of groundnut research and development in Malawi: An ex-post analysis 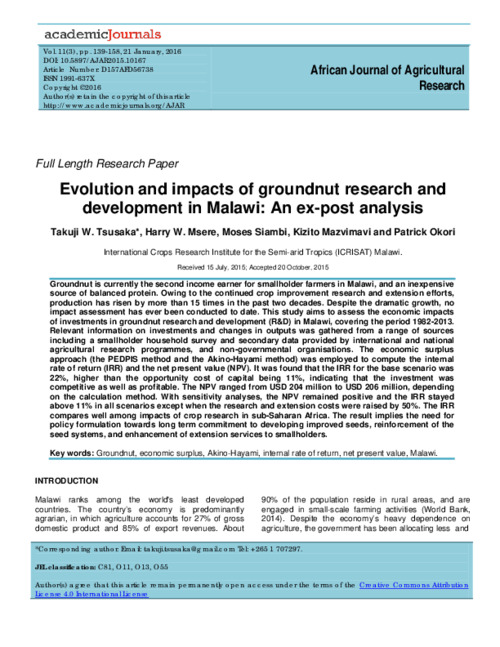 Groundnut is currently the second income earner for smallholder farmers in Malawi, and an inexpensive source of balanced protein. Owing to the continued crop improvement research and extension efforts, production has risen by more than 15 times in the past two decades. Despite the dramatic growth, no impact assessment has ever been conducted to date. This study aims to assess the economic impacts of investments in groundnut research and development (R&D) in Malawi, covering the period 1982-2013. Relevant information on investments and changes in outputs was gathered from a range of sources including a smallholder household survey and secondary data provided by international and national agricultural research programmes, and non-governmental organisations. The economic surplus approach (the PEDPIS method and the Akino-Hayami method) was employed to compute the internal rate of return (IRR) and the net present value (NPV). It was found that the IRR for the base scenario was 22%, higher than the opportunity cost of capital being 11%, indicating that the investment was competitive as well as profitable. The NPV ranged from USD 204 million to USD 206 million, depending on the calculation method. With sensitivity analyses, the NPV remained positive and the IRR stayed above 11% in all scenarios except when the research and extension costs were raised by 50%. The IRR compares well among impacts of crop research in sub-Saharan Africa. The result implies the need for policy formulation towards long term commitment to developing improved seeds, reinforcement of the seed systems, and enhancement of extension services to smallholders.