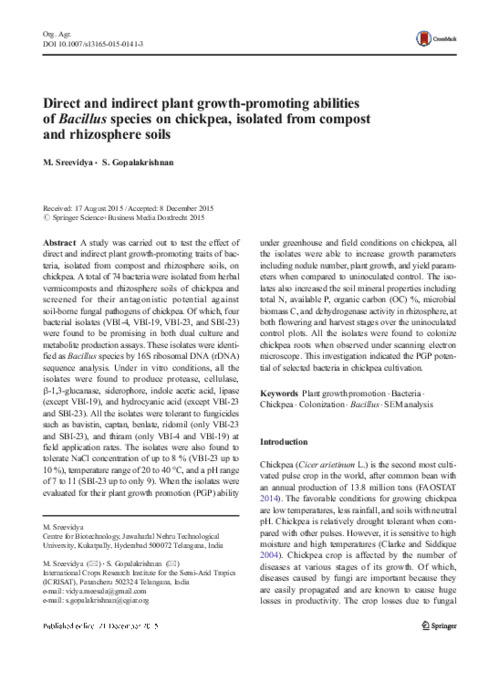 A study was carried out to test the effect of direct and indirect plant growth-promoting traits of bacteria, isolated from compost and rhizosphere soils, on chickpea. A total of 74 bacteria were isolated from herbal vermicomposts and rhizosphere soils of chickpea and screened for their antagonistic potential against soil-borne fungal pathogens of chickpea. Of which, four bacterial isolates (VBI-4, VBI-19, VBI-23, and SBI-23) were found to be promising in both dual culture and metabolite production assays. These isolates were identified as Bacillus species by 16S ribosomal DNA (rDNA) sequence analysis. Under in vitro conditions, all the isolates were found to produce protease, cellulase, β-1,3-glucanase, siderophore, indole acetic acid, lipase (except VBI-19), and hydrocyanic acid (except VBI-23 and SBI-23). All the isolates were tolerant to fungicides such as bavistin, captan, benlate, ridomil (only VBI-23 and SBI-23), and thiram (only VBI-4 and VBI-19) at field application rates. The isolates were also found to tolerate NaCl concentration of up to 8 % (VBI-23 up to 10 %), temperature range of 20 to 40 °C, and a pH range of 7 to 11 (SBI-23 up to only 9). When the isolates were evaluated for their plant growth promotion (PGP) ability under greenhouse and field conditions on chickpea, all the isolates were able to increase growth parameters including nodule number, plant growth, and yield parameters when compared to uninoculated control. The isolates also increased the soil mineral properties including total N, available P, organic carbon (OC) %, microbial biomass C, and dehydrogenase activity in rhizosphere, at both flowering and harvest stages over the uninoculated control plots. All the isolates were found to colonize chickpea roots when observed under scanning electron microscope. This investigation indicated the PGP potential of selected bacteria in chickpea cultivation.