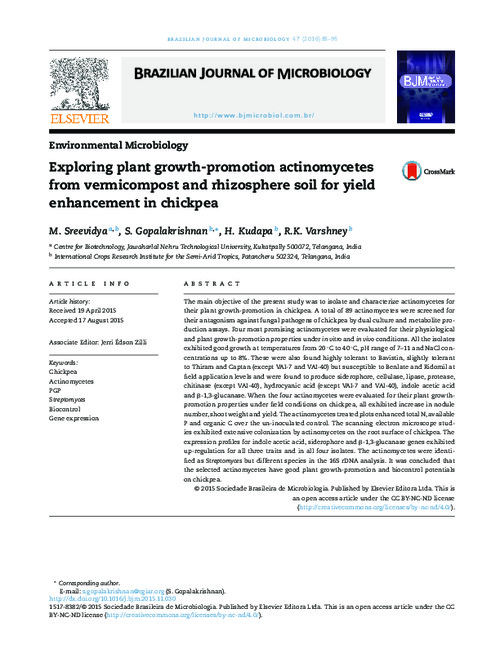 tThe main objective of the present study was to isolate and characterize actinomycetes fortheir plant growth-promotion in chickpea. A total of 89 actinomycetes were screened fortheir antagonism against fungal pathogens of chickpea by dual culture and metabolite pro-duction assays. Four most promising actinomycetes were evaluated for their physiologicaland plant growth-promotion properties under in vitro and in vivo conditions. All the isolatesexhibited good growth at temperatures from 20◦C to 40◦C, pH range of 7–11 and NaCl con-centrations up to 8%. These were also found highly tolerant to Bavistin, slightly tolerantto Thiram and Captan (except VAI-7 and VAI-40) but susceptible to Benlate and Ridomil atfield application levels and were found to produce siderophore, cellulase, lipase, protease,chitinase (except VAI-40), hydrocyanic acid (except VAI-7 and VAI-40), indole acetic acidand -1,3-glucanase. When the four actinomycetes were evaluated for their plant growth-promotion properties under field conditions on chickpea, all exhibited increase in nodulenumber, shoot weight and yield. The actinomycetes treated plots enhanced total N, availableP and organic C over the un-inoculated control. The scanning electron microscope stud-ies exhibited extensive colonization by actinomycetes on the root surface of chickpea. Theexpression profiles for indole acetic acid, siderophore and -1,3-glucanase genes exhibitedup-regulation for all three traits and in all four isolates. The actinomycetes were identi-fied as Streptomyces but different species in the 16S rDNA analysis. It was concluded thatthe selected actinomycetes have good plant growth-promotion and biocontrol potentialson chickpea