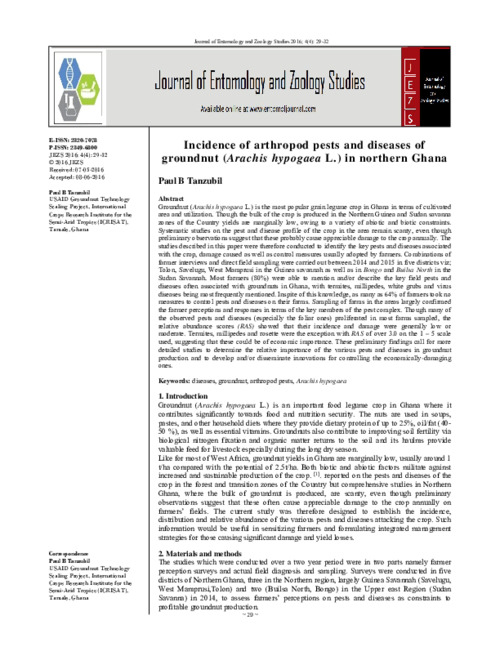 Groundnut (Arachis hypogaea L.) is the most popular grain legume crop in Ghana in terms of cultivated area and utilization. Though the bulk of the crop is produced in the Northern Guinea and Sudan savanna zones of the Country yields are marginally low, owing to a variety of abiotic and biotic constraints. Systematic studies on the pest and disease profile of the crop in the area remain scanty, even though preliminary observations suggest that these probably cause appreciable damage to the crop annually. The studies described in this paper were therefore conducted to identify the key pests and diseases associated with the crop, damage caused as well as control measures usually adopted by farmers. Combinations of farmer interviews and direct field sampling were carried out between 2014 and 2015 in five districts viz; Tolon, Savelugu, West Mamprusi in the Guinea savannah as well as in Bongo and Builsa North in the Sudan Savannah. Most farmers (80%) were able to mention and/or describe the key field pests and diseases often associated with groundnuts in Ghana, with termites, millipedes, white grubs and virus diseases being most frequently mentioned. Inspite of this knowledge, as many as 64% of farmers took no measures to control pests and diseases on their farms. Sampling of farms in the areas largely confirmed the farmer perceptions and responses in terms of the key members of the pest complex. Though many of the observed pests and diseases (especially the foliar ones) proliferated in most farms sampled, the relative abundance scores (RAS) showed that their incidence and damage were generally low or moderate. Termites, millipedes and rosette were the exception with RAS of over 3.0 on the 1 – 5 scale used, suggesting that these could be of economic importance. These preliminary findings call for more detailed studies to determine the relative importance of the various pests and diseases in groundnut production and to develop and/or disseminate innovations for controlling the economically-damaging ones.