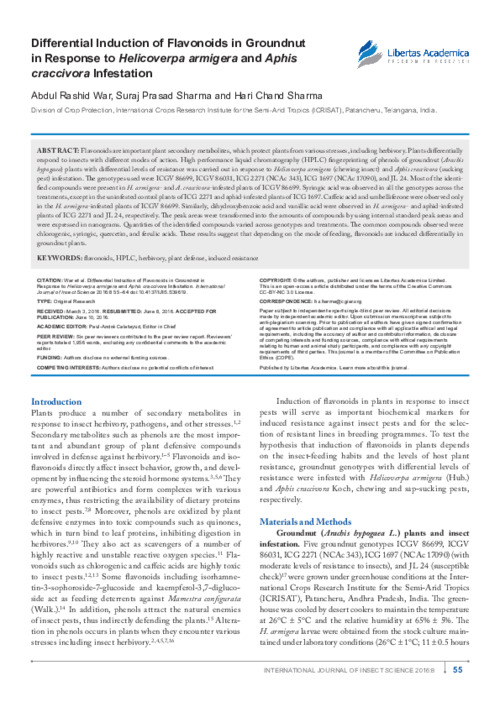 Flavonoids are important plant secondary metabolites, which protect plants from various stresses, including herbivory. Plants differentially respond to insects with different modes of action. High performance liquid chromatography (HPLC) fingerprinting of phenols of groundnut (Arachis hypogaea) plants with differential levels of resistance was carried out in response to Helicoverpa armigera (chewing insect) and Aphis craccivora (sucking pest) infestation. The genotypes used were ICGV 86699, ICGV 86031, ICG 2271 (NCAc 343), ICG 1697 (NCAc 17090), and JL 24. Most of the identified compounds were present in H. armigera- and A. craccivora-infested plants of ICGV 86699. Syringic acid was observed in all the genotypes across the treatments, except in the uninfested control plants of ICG 2271 and aphid-infested plants of ICG 1697. Caffeic acid and umbelliferone were observed only in the H. armigera-infested plants of ICGV 86699. Similarly, dihydroxybenzoic acid and vanillic acid were observed in H. armigera- and aphid-infested plants of ICG 2271 and JL 24, respectively. The peak areas were transformed into the amounts of compounds by using internal standard peak areas and were expressed in nanograms. Quantities of the identified compounds varied across genotypes and treatments. The common compounds observed were chlorogenic, syringic, quercetin, and ferulic acids. These results suggest that depending on the mode of feeding, flavonoids are induced differentially in groundnut plants.