Root adaptations to soils with low fertility and aluminium toxicity 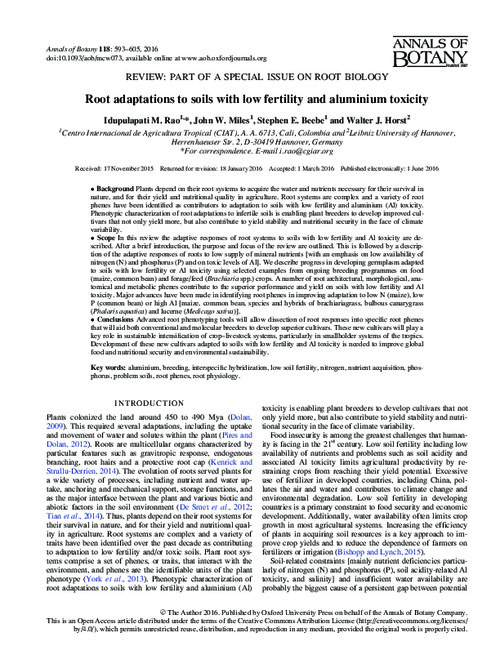 Background Plants depend on their root systems to acquire the water and nutrients necessary for their survival in nature, and for their yield and nutritional quality in agriculture. Root systems are complex and a variety of root phenes have been identified as contributors to adaptation to soils with low fertility and aluminium (Al) toxicity. Phenotypic characterization of root adaptations to infertile soils is enabling plant breeders to develop improved cultivars that not only yield more, but also contribute to yield stability and nutritional security in the face of climate variability. Scope In this review the adaptive responses of root systems to soils with low fertility and Al toxicity are described. After a brief introduction, the purpose and focus of the review are outlined. This is followed by a description of the adaptive responses of roots to low supply of mineral nutrients [with an emphasis on low availability of nitrogen (N) and phosphorus (P) and on toxic levels of Al]. We describe progress in developing germplasm adapted to soils with low fertility or Al toxicity using selected examples from ongoing breeding programmes on food (maize, common bean) and forage/feed (Brachiaria spp.) crops. A number of root architectural, morphological, anatomical and metabolic phenes contribute to the superior performance and yield on soils with low fertility and Al toxicity. Major advances have been made in identifying root phenes in improving adaptation to low N (maize), low P (common bean) or high Al [maize, common bean, species and hybrids of brachiariagrass, bulbous canarygrass (Phalaris aquatica) and lucerne (Medicago sativa)]. Conclusions Advanced root phenotyping tools will allow dissection of root responses into specific root phenes that will aid both conventional and molecular breeders to develop superior cultivars. These new cultivars will play a key role in sustainable intensification of crop–livestock systems, particularly in smallholder systems of the tropics. Development of these new cultivars adapted to soils with low fertility and Al toxicity is needed to improve global food and nutritional security and environmental sustainability.