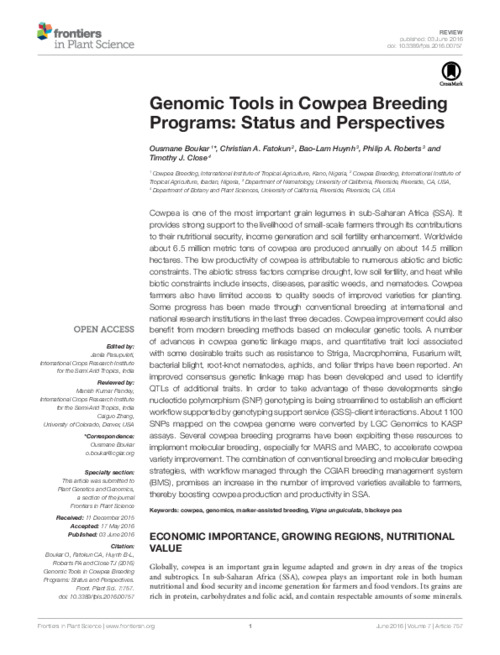 Cowpea is one of the most important grain legumes in sub-Saharan Africa (SSA). It provides strong support to the livelihood of small-scale farmers through its contributions to their nutritional security, income generation and soil fertility enhancement. Worldwide about 6.5 million metric tons of cowpea are produced annually on about 14.5 million hectares. The low productivity of cowpea is attributable to numerous abiotic and biotic constraints. The abiotic stress factors comprise drought, low soil fertility, and heat while biotic constraints include insects, diseases, parasitic weeds, and nematodes. Cowpea farmers also have limited access to quality seeds of improved varieties for planting. Some progress has been made through conventional breeding at international and national research institutions in the last three decades. Cowpea improvement could also beneﬁt from modern breeding methods based on molecular genetic tools. A number of advances in cowpea genetic linkage maps, and quantitative trait loci associated with some desirable traits such as resistance to Striga, Macrophomina, Fusarium wilt, bacterial blight, root-knot nematodes, aphids, and foliar thrips have been reported. An improved consensus genetic linkage map has been developed and used to identify QTLs of additional traits. In order to take advantage of these developments single nucleotide polymorphism (SNP) genotyping is being streamlined to establish an efﬁcient workﬂowsupportedbygenotypingsupportservice(GSS)-clientinteractions.About1100 SNPs mapped on the cowpea genome were converted by LGC Genomics to KASP assays. Several cowpea breeding programs have been exploiting these resources to implement molecular breeding, especially for MARS and MABC, to accelerate cowpea variety improvement. The combination of conventional breeding and molecular breeding strategies, with workﬂow managed through the CGIAR breeding management system (BMS), promises an increase in the number of improved varieties available to farmers, thereby boosting cowpea production and productivity in SSA.