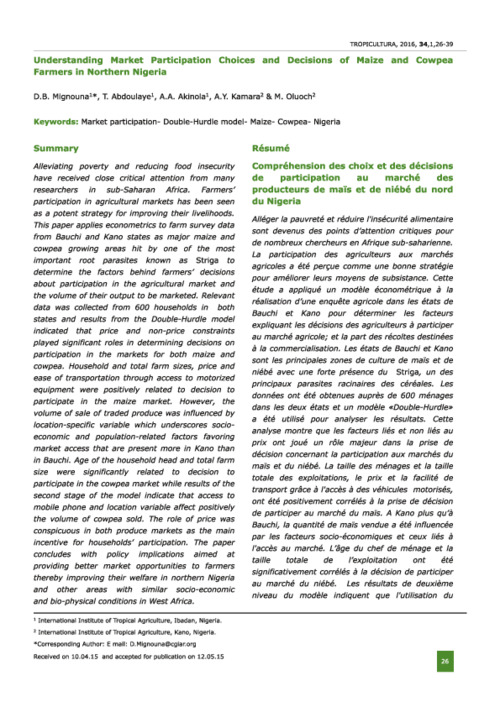 Alleviating poverty and reducing food insecurity have received close critical attention from many researchers in sub­Saharan Africa. Farmers' participation in agricultural markets has been seen as a potent strategy for improving their livelihoods. This paper applies econometrics to farm survey data from Bauchi and Kano states as major maize and cowpea growing areas hit by one of the most important root parasites known as Striga to determine the factors behind farmers' decisions about participation in the agricultural market and the volume of their output to be marketed. Relevant data was collected from 600 households in both states and results from the Double­Hurdle model indicated that price and non­price constraints played significant roles in determining decisions on participation in the markets for both maize and cowpea. Household and total farm sizes, price and ease of transportation through access to motorized equipment were positively related to decision to participate in the maize market. However, the volume of sale of traded produce was influenced by location­specific variable which underscores socio­economic and population­related factors favoring market access that are present more in Kano than in Bauchi. Age of the household head and total farm size were significantly related to decision to participate in the cowpea market while results of the second stage of the model indicate that access to mobile phone and location variable affect positively the volume of cowpea sold. The role of price was conspicuous in both produce markets as the main incentive for households' participation. The paper concludes with policy implications aimed at providing better market opportunities to farmers thereby improving their welfare in northern Nigeria and other areas with similar socio­economic and bio­physical conditions in West Africa.