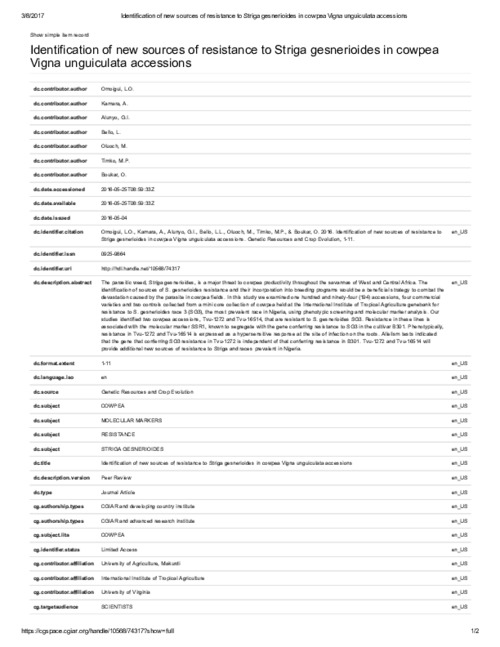 The parasitic weed, Striga gesnerioides, is a major threat to cowpea productivity throughout the savannas of West and Central Africa. The identification of sources of S. gesnerioides resistance and their incorporation into breeding programs would be a beneficial strategy to combat the devastation caused by the parasite in cowpea fields. In this study we examined one hundred and ninety­four (194) accessions, four commercial varieties and two controls collected from a mini core collection of cowpea held at the International Institute of Tropical Agriculture genebank for resistance to S. gesnerioides race 3 (SG3), the most prevalent race in Nigeria, using phenotypic screening and molecular marker analysis. Our studies identified two cowpea accessions, Tvu­1272 and Tvu­16514, that are resistant to S. gesnerioides SG3. Resistance in these lines is associated with the molecular marker SSR1, known to segregate with the gene conferring resistance to SG3 in the cultivar B301. Phenotypically, resistance in Tvu­1272 and Tvu­16514 is expressed as a hypersensitive response at the site of infection on the roots. Allelism tests indicated that the gene that conferring SG3 resistance in Tvu­1272 is independent of that conferring resistance in B301. Tvu­1272 and Tvu­16514 will provide additional new sources of resistance to Striga and races prevalent in Nigeria