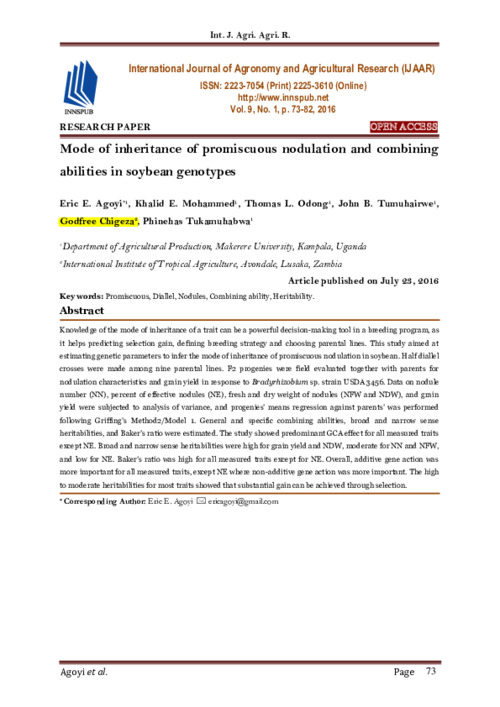 Knowledge of the mode of inheritance of a trait can be a powerful decision-making tool in a breeding program, as it helps predicting selection gain, defining breeding strategy and choosing parental lines. This study aimed at estimating genetic parameters to infer the mode of inheritance of promiscuous nodulation in soybean. Half diallel crosses were made among nine parental lines. F2 progenies were field evaluated together with parents for nodulation characteristics and grain yield in response to Bradyrhizobium sp. strain USDA 3456. Data on nodule number (NN), percent of effective nodules (NE), fresh and dry weight of nodules (NFW and NDW), and grain yield were subjected to analysis of variance, and progenies’ means regression against parents’ was performed following Griffing’s Method2/Model 1. General and specific combining abilities, broad and narrow sense heritabilities, and Baker’s ratio were estimated. The study showed predominant GCA effect for all measured traits except NE. Broad and narrow sense heritabilities were high for grain yield and NDW, moderate for NN and NFW, and low for NE. Baker’s ratio was high for all measured traits except for NE. Overall, additive gene action was more important for all measured traits, except NE where non-additive gene action was more important. The high to moderate heritabilities for most traits showed that substantial gain can be achieved through selection.