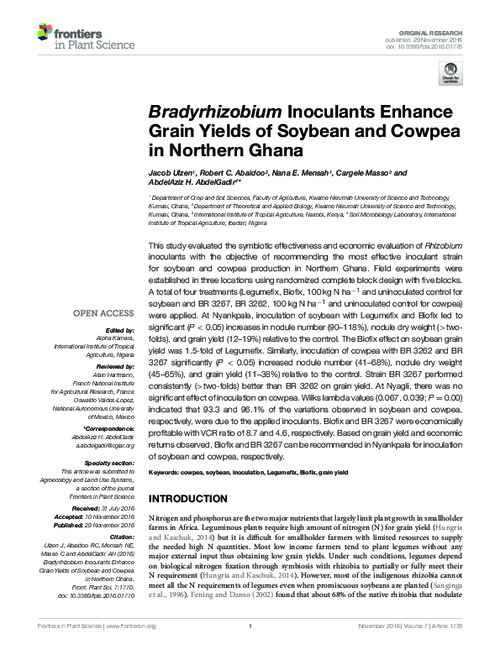 This study evaluated the symbiotic effectiveness and economic evaluation of Rhizobium inoculants with the objective of recommending the most effective inoculant strain for soybean and cowpea production in Northern Ghana. Field experiments were established in three locations using randomized complete block design with ﬁve blocks. A total of four treatments (Legumeﬁx, Bioﬁx, 100 kg N ha 1 and uninoculated control for soybean and BR 3267, BR 3262, 100 kg N ha 1 and uninoculated control for cowpea) were applied. At Nyankpala, inoculation of soybean with Legumeﬁx and Bioﬁx led to signiﬁcant (P < 0.05) increases in nodule number (90–118%), nodule dry weight (> twofolds), and grain yield (12–19%) relative to the control. The Bioﬁx effect on soybean grain yield was 1.5-fold of Legumeﬁx. Similarly, inoculation of cowpea with BR 3262 and BR 3267 signiﬁcantly (P < 0.05) increased nodule number (41–68%), nodule dry weight (45–65%), and grain yield (11–38%) relative to the control. Strain BR 3267 performed consistently (> two-folds) better than BR 3262 on grain yield. At Nyagli, there was no signiﬁcant effect of inoculation on cowpea. Wilks lambda values (0.067, 0.039; P D 0.00) indicated that 93.3 and 96.1% of the variations observed in soybean and cowpea, respectively, were due to the applied inoculants. Bioﬁx and BR 3267 were economically proﬁtable with VCR ratio of 8.7 and 4.6, respectively. Based on grain yield and economic returns observed, Bioﬁx and BR 3267 can be recommended in Nyankpala for inoculation of soybean and cowpea, respectively.