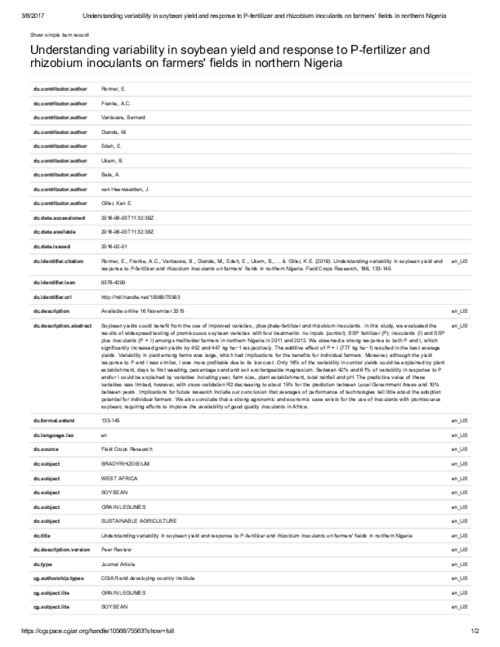 Soybean yields could benefit from the use of improved varieties, phosphate-fertilizer and rhizobium inoculants. In this study, we evaluated the results of widespread testing of promiscuous soybean varieties with four treatments: no inputs (control); SSP fertilizer (P); inoculants (I) and SSP plus inoculants (P + I) among smallholder farmers in northern Nigeria in 2011 and 2012. We observed a strong response to both P and I, which significantly increased grain yields by 452 and 447 kg ha−1 respectively. The additive effect of P + I (777 kg ha−1) resulted in the best average yields. Variability in yield among farms was large, which had implications for the benefits for individual farmers. Moreover, although the yield response to P and I was similar, I was more profitable due to its low cost. Only 16% of the variability in control yields could be explained by plant establishment, days to first weeding, percentage sand and soil exchangeable magnesium. Between 42% and 61% of variability in response to P and/or I could be explained by variables including year, farm size, plant establishment, total rainfall and pH. The predictive value of these variables was limited, however, with cross-validation R2 decreasing to about 15% for the prediction between Local Government Areas and 10% between years. Implications for future research include our conclusion that averages of performance of technologies tell little about the adoption potential for individual farmers. We also conclude that a strong agronomic and economic case exists for the use of inoculants with promiscuous soybean, requiring efforts to improve the availability of good quality inoculants in Africa.