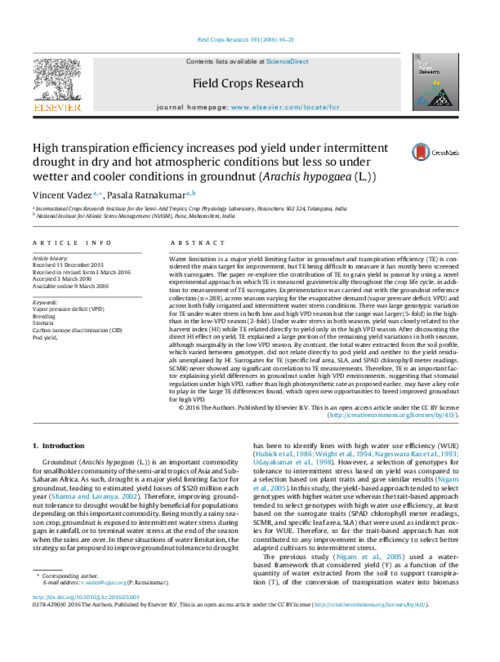 Water limitation is a major yield limiting factor in groundnut and transpiration efficiency (TE) is con-sidered the main target for improvement, but TE being difficult to measure it has mostly been screenedwith surrogates. The paper re-explore the contribution of TE to grain yield in peanut by using a novelexperimental approach in which TE is measured gravimetrically throughout the crop life cycle, in addi-tion to measurement of TE surrogates. Experimentation was carried out with the groundnut referencecollection (n = 288), across seasons varying for the evaporative demand (vapor pressure deficit, VPD) andacross both fully irrigated and intermittent water stress conditions. There was large genotypic variationfor TE under water stress in both low and high VPD season but the range was larger (5-fold) in the high-than in the low-VPD season (2-fold). Under water stress in both seasons, yield was closely related to theharvest index (HI) while TE related directly to yield only in the high VPD season. After discounting thedirect HI effect on yield, TE explained a large portion of the remaining yield variations in both seasons,although marginally in the low VPD season. By contrast, the total water extracted from the soil profile,which varied between genotypes, did not relate directly to pod yield and neither to the yield residu-als unexplained by HI. Surrogates for TE (specific leaf area, SLA, and SPAD chlorophyll meter readings,SCMR) never showed any significant correlation to TE measurements. Therefore, TE is an important fac-tor explaining yield differences in groundnut under high VPD environments, suggesting that stomatalregulation under high VPD, rather than high photosynthetic rate as proposed earlier, may have a key roleto play in the large TE differences found, which open new opportunities to breed improved groundnutfor high VPD.