Exciting journey of 10 years from genomes to fields and markets: Some success stories of genomics-assisted breeding in chickpea, pigeonpea and groundnut 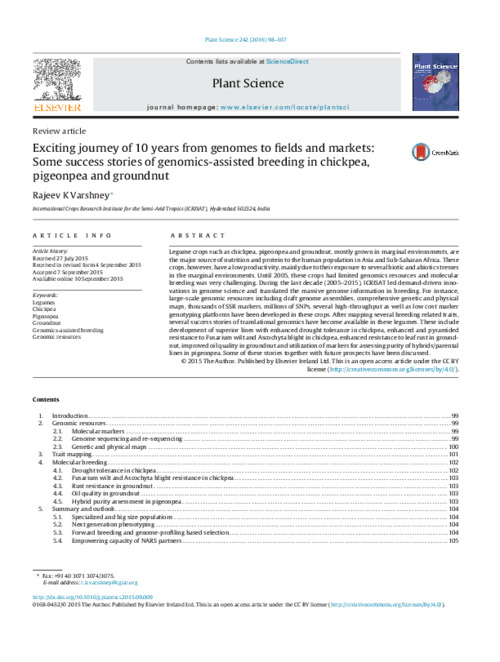 Rajeev Varshney. (31/1/2016). Exciting journey of 10 years from genomes to fields and markets: Some success stories of genomics-assisted breeding in chickpea, pigeonpea and groundnut. Plant Science, 242, pp. 98-107.

Legume crops such as chickpea, pigeonpea and groundnut, mostly grown in marginal environments, are the major source of nutrition and protein to the human population in Asia and Sub-Saharan Africa. These crops, however, have a low productivity, mainly due to their exposure to several biotic and abiotic stresses in the marginal environments. Until 2005, these crops had limited genomics resources and molecular breeding was very challenging. During the last decade (2005–2015), ICRISAT led demand-driven innovations in genome science and translated the massive genome information in breeding. For instance, large-scale genomic resources including draft genome assemblies, comprehensive genetic and physical maps, thousands of SSR markers, millions of SNPs, several high-throughput as well as low cost marker genotyping platforms have been developed in these crops. After mapping several breeding related traits, several success stories of translational genomics have become available in these legumes. These include development of superior lines with enhanced drought tolerance in chickpea, enhanced and pyramided resistance to Fusarium wilt and Ascochyta blight in chickpea, enhanced resistance to leaf rust in groundnut, improved oil quality in groundnut and utilization of markers for assessing purity of hybrids/parental lines in pigeonpea. Some of these stories together with future prospects have been discussed