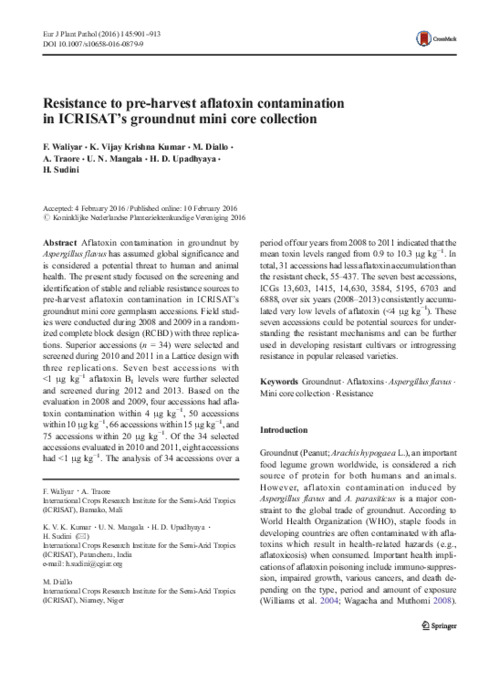 Aflatoxin contamination in groundnut by Aspergillus flavus has assumed global significance and is considered a potential threat to human and animal health. The present study focused on the screening and identification of stable and reliable resistance sources to pre-harvest aflatoxin contamination in ICRISAT’s groundnut mini core germplasm accessions. Field studies were conducted during 2008 and 2009 in a randomized complete block design (RCBD) with three replications. Superior accessions (n = 34) were selected and screened during 2010 and 2011 in a Lattice design with three replications. Seven best accessions with <1 μg kg−1 aflatoxin B1 levels were further selected and screened during 2012 and 2013. Based on the evaluation in 2008 and 2009, four accessions had aflatoxin contamination within 4 μg kg−1, 50 accessions within 10 μg kg−1, 66 accessions within 15 μg kg−1, and 75 accessions within 20 μg kg−1. Of the 34 selected accessions evaluated in 2010 and 2011, eight accessions had <1 μg kg−1. The analysis of 34 accessions over a period of four years from 2008 to 2011 indicated that the mean toxin levels ranged from 0.9 to 10.3 μg kg−1. In total, 31 accessions had less aflatoxin accumulation than the resistant check, 55–437. The seven best accessions, ICGs 13,603, 1415, 14,630, 3584, 5195, 6703 and 6888, over six years (2008–2013) consistently accumulated very low levels of aflatoxin (<4 μg kg−1). These seven accessions could be potential sources for understanding the resistant mechanisms and can be further used in developing resistant cultivars or introgressing resistance in popular released varieties.