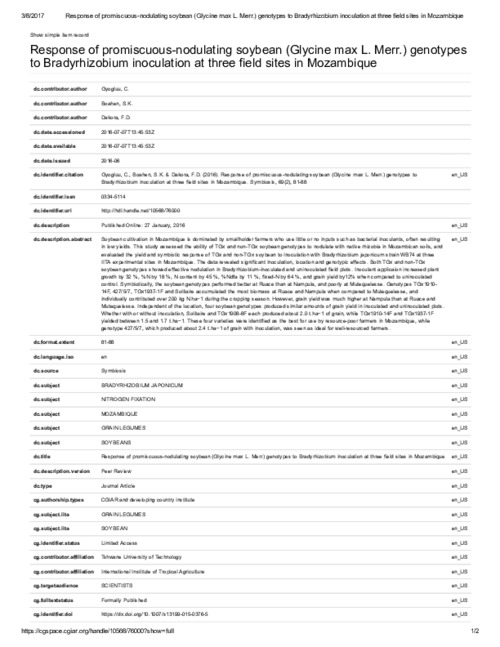 Soybean cultivation in Mozambique is dominated by smallholder farmers who use little or no inputs such as bacterial inoculants, often resulting in low yields. This study assessed the ability of TGx and non-TGx soybean genotypes to nodulate with native rhizobia in Mozambican soils, and evaluated the yield and symbiotic response of TGx and non-TGx soybean to inoculation with Bradyrhizobium japonicum strain WB74 at three IITA experimental sites in Mozambique. The data revealed significant inoculation, location and genotypic effects. Both TGx and non-TGx soybean genotypes showed effective nodulation in Bradyrhizobium-inoculated and uninoculated field plots. Inoculant applicaion increased plant growth by 32 %, %N by 18 %, N content by 45 %, %Ndfa by 11 %, fixed-N by 64 %, and grain yield by12% when compared to uninoculated control. Symbiotically, the soybean genotypes performed better at Ruace than at Nampula, and poorly at Mutequelesse. Genotypes TGx1910-14F, 427/5/7, TGx1937-1F and Solitaire accumulated the most biomass at Ruace and Nampula when compared to Mutequelesse, and individually contributed over 200 kg N.ha−1 during the cropping season. However, grain yield was much higher at Nampula than at Ruace and Mutequelesse. Independent of the location, four soybean genotypes produced similar amounts of grain yield in inoculated and uninoculated plots. Whether with or without inoculation, Solitaire and TGx1908-8F each produced about 2.0 t.ha−1 of grain, while TGx1910-14F and TGx1937-1F yielded between 1.5 and 1.7 t.ha−1. These four varieties were identified as the best for use by resource-poor farmers in Mozambique, while genotype 427/5/7, which produced about 2.4 t.ha−1 of grain with inoculation, was seen as ideal for well-resourced farmers.