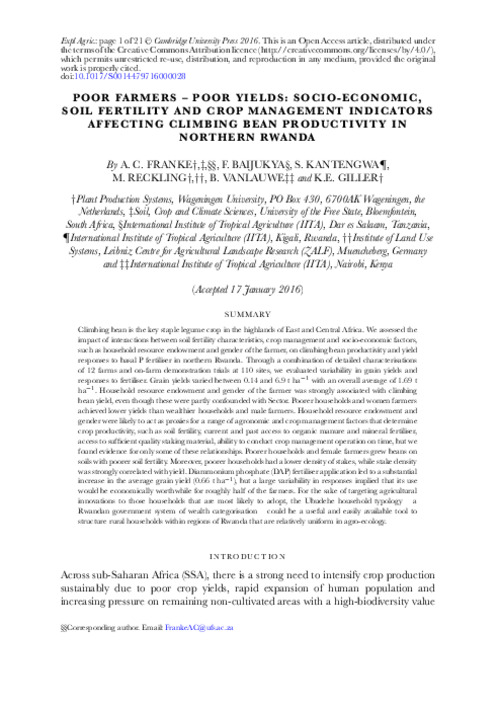 Climbing bean is the key staple legume crop in the highlands of East and Central Africa. We assessed the impact of interactions between soil fertility characteristics, crop management and socio-economic factors, such as household resource endowment and gender of the farmer, on climbing bean productivity and yield responses to basal P fertiliser in northern Rwanda. Through a combination of detailed characterisations of 12 farms and on-farm demonstration trials at 110 sites, we evaluated variability in grain yields and responses to fertiliser. Grain yields varied between 0.14 and 6.9 t ha−1 with an overall average of 1.69 t ha−1. Household resource endowment and gender of the farmer was strongly associated with climbing bean yield, even though these were partly confounded with Sector. Poorer households and women farmers achieved lower yields than wealthier households and male farmers. Household resource endowment and gender were likely to act as proxies for a range of agronomic and crop management factors that determine crop productivity, such as soil fertility, current and past access to organic manure and mineral fertiliser, access to sufficient quality staking material, ability to conduct crop management operation on time, but we found evidence for only some of these relationships. Poorer households and female farmers grew beans on soils with poorer soil fertility. Moreover, poorer households had a lower density of stakes, while stake density was strongly correlated with yield. Diammonium phosphate (DAP) fertiliser application led to a substantial increase in the average grain yield (0.66 t ha−1), but a large variability in responses implied that its use would be economically worthwhile for roughly half of the farmers. For the sake of targeting agricultural innovations to those households that are most likely to adopt, the Ubudehe household typology – a Rwandan government system of wealth categorisation – could be a useful and easily available tool to structure rural households within regions of Rwanda that are relatively uniform in agro-ecology.