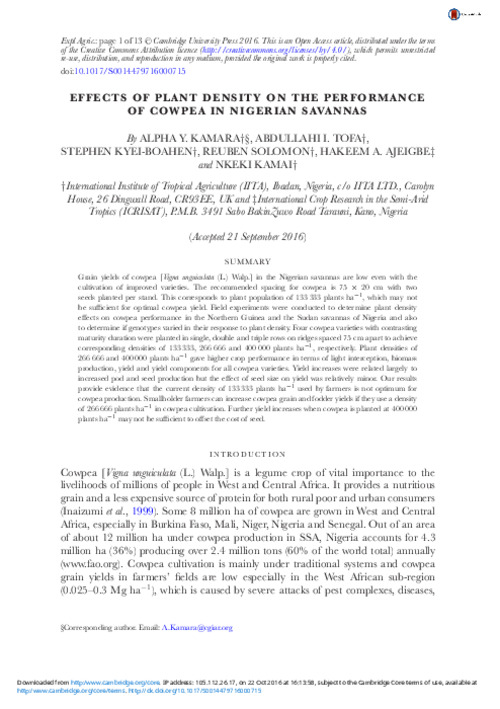 Grain yields of cowpea [Vigna unguiculata (L.) Walp.] in the Nigerian savannas are low even with the cultivation of improved varieties. The recommended spacing for cowpea is 75 × 20 cm with two seeds planted per stand. This corresponds to plant population of 133 333 plants ha , which may not be sufﬁcient for optimal cowpea yield. Field experiments were conducted to determine plant density effects on cowpea performance in the Northern Guinea and the Sudan savannas of Nigeria and also to determine if genotypes varied in their response to plant density. Four cowpea varieties with contrasting maturity duration were planted in single, double and triple rows on ridges spaced 75 cm apart to achieve corresponding densities of 133 333, 266 666 and 400 000 plants ha −1 , respectively. Plant densities of 266 666 and 400 000 plants ha −1 gave higher crop performance in terms of light interception, biomass production, yield and yield components for all cowpea varieties. Yield increases were related largely to increased pod and seed production but the effect of seed size on yield was relatively minor. Our results provide evidence that the current density of 133 333 plants ha −1 used by farmers is not optimum for cowpea production. Smallholder farmers can increase cowpea grain and fodder yields if they use a density of 266 666 plants ha −1 in cowpea cultivation. Further yield increases when cowpea is planted at 400 000 plants ha −1 may not be sufﬁcient to offset the cost of seed